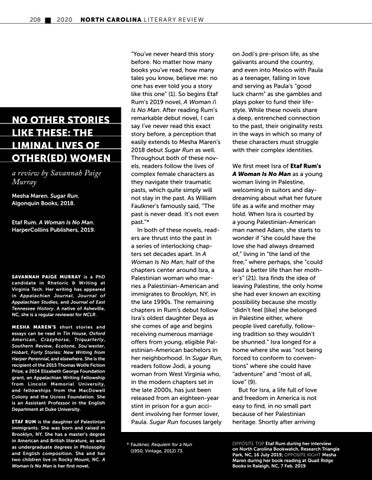 NO OTHER STORIES LIKE THESE: THE LIMINAL LIVES OF OTHER(ED) WOMEN a review by Savannah Paige Murray Mesha Maren. Sugar Run. Algonquin Books, 2018. Etaf Rum. A Woman Is No Man. HarperCollins Publishers, 2019.

SAVANNAH PAIGE MURRAY is a PhD candidate in Rhetoric & Writing at Virginia Tech. Her writing has appeared in Appalachian Journal, Journal of Appalachian Studies, and Journal of East Tennessee History. A native of Asheville, NC, she is a regular reviewer for NCLR. MESHA MAREN’S short stories and essays can be read in Tin House, Oxford American, Crazyhorse, Triquarterly, Southern Review, Ecotone, Sou’wester, Hobart, Forty Stories: New Writing from Harper Perennial, and elsewhere. She is the recipient of the 2015 Thomas Wolfe Fiction Prize, a 2014 Elizabeth George Foundation grant, an Appalachian Writing Fellowship from Lincoln Memorial University, and fellowships from the MacDowell Colony and the Ucross Foundation. She is an Assistant Professor in the English Department at Duke University. ETAF RUM is the daughter of Palestinian immigrants. She was born and raised in Brooklyn, NY. She has a master’s degree in American and British literature, as well as undergraduate degrees in Philosophy and English composition. She and her two children live in Rocky Mount, NC. A Woman Is No Man is her first novel.

“You’ve never heard this story before. No matter how many books you’ve read, how many tales you know, believe me: no one has ever told you a story like this one” (1). So begins Etaf Rum’s 2019 novel, A Woman i\ Is No Man. After reading Rum’s remarkable debut novel, I can say I’ve never read this exact story before, a perception that easily extends to Mesha Maren’s 2018 debut Sugar Run as well. Throughout both of these novels, readers follow the lives of complex female characters as they navigate their traumatic pasts, which quite simply will not stay in the past. As William Faulkner’s famously said, “The past is never dead. It’s not even past.”* In both of these novels, readers are thrust into the past in a series of interlocking chapters set decades apart. In A Woman Is No Man, half of the chapters center around Isra, a Palestinian woman who marries a Palestinian-American and immigrates to Brooklyn, NY, in the late 1990s. The remaining chapters in Rum’s debut follow Isra’s oldest daughter Deya as she comes of age and begins receiving numerous marriage offers from young, eligible Palestinian-American bachelors in her neighborhood. In Sugar Run, readers follow Jodi, a young woman from West Virginia who, in the modern chapters set in the late 2000s, has just been released from an eighteen-year stint in prison for a gun accident involving her former lover, Paula. Sugar Run focuses largely

on Jodi’s pre-prison life, as she galivants around the country, and even into Mexico with Paula as a teenager, falling in love and serving as Paula’s “good luck charm” as she gambles and plays poker to fund their lifestyle. While these novels share a deep, entrenched connection to the past, their originality rests in the ways in which so many of these characters must struggle with their complex identities. We first meet Isra of Etaf Rum’s A Woman Is No Man as a young woman living in Palestine, welcoming in suitors and daydreaming about what her future life as a wife and mother may hold. When Isra is courted by a young Palestinian-American man named Adam, she starts to wonder if “she could have the love she had always dreamed of,” living in “the land of the free,” where perhaps, she “could lead a better life than her mother’s” (21). Isra finds the idea of leaving Palestine, the only home she had ever known an exciting possibility because she mostly “didn’t feel [like] she belonged in Palestine either, where people lived carefully, following tradition so they wouldn’t be shunned.” Isra longed for a home where she was “not being forced to conform to conventions” where she could have “adventure” and “most of all, love” (9). But for Isra, a life full of love and freedom in America is not easy to find, in no small part because of her Palestinian heritage. Shortly after arriving