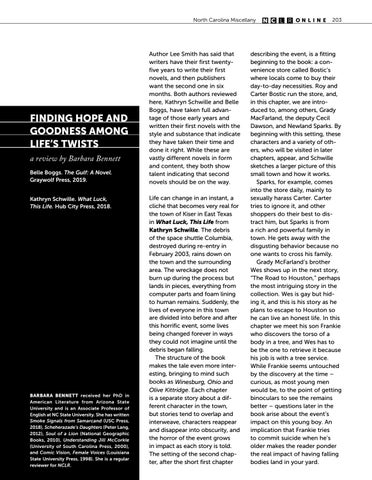 Author Lee Smith has said that writers have their first twentyfive years to write their first novels, and then publishers want the second one in six months. Both authors reviewed here, Kathryn Schwille and Belle Boggs, have taken full advantage of those early years and written their first novels with the style and substance that indicate they have taken their time and done it right. While these are vastly different novels in form and content, they both show talent indicating that second novels should be on the way. Life can change in an instant, a cliché that becomes very real for the town of Kiser in East Texas in What Luck, This Life from Kathryn Schwille. The debris of the space shuttle Columbia, destroyed during re-entry in February 2003, rains down on the town and the surrounding area. The wreckage does not burn up during the process but lands in pieces, everything from computer parts and foam lining to human remains. Suddenly, the lives of everyone in this town are divided into before and after this horrific event, some lives being changed forever in ways they could not imagine until the debris began falling. The structure of the book makes the tale even more interesting, bringing to mind such books as Winesburg, Ohio and Olive Kittridge. Each chapter is a separate story about a different character in the town, but stories tend to overlap and interweave, characters reappear and disappear into obscurity, and the horror of the event grows in impact as each story is told. The setting of the second chapter, after the short first chapter

describing the event, is a fitting beginning to the book: a convenience store called Bostic’s where locals come to buy their day-to-day necessities. Roy and Carter Bostic run the store, and, in this chapter, we are introduced to, among others, Grady MacFarland, the deputy Cecil Dawson, and Newland Sparks. By beginning with this setting, these characters and a variety of others, who will be visited in later chapters, appear, and Schwille sketches a larger picture of this small town and how it works. Sparks, for example, comes into the store daily, mainly to sexually harass Carter. Carter tries to ignore it, and other shoppers do their best to distract him, but Sparks is from a rich and powerful family in town. He gets away with the disgusting behavior because no one wants to cross his family. Grady McFarland’s brother Wes shows up in the next story, “The Road to Houston,” perhaps the most intriguing story in the collection. Wes is gay but hiding it, and this is his story as he plans to escape to Houston so he can live an honest life. In this chapter we meet his son Frankie who discovers the torso of a body in a tree, and Wes has to be the one to retrieve it because his job is with a tree service. While Frankie seems untouched by the discovery at the time – curious, as most young men would be, to the point of getting binoculars to see the remains better – questions later in the book arise about the event’s impact on this young boy. An implication that Frankie tries to commit suicide when he’s older makes the reader ponder the real impact of having falling bodies land in your yard.