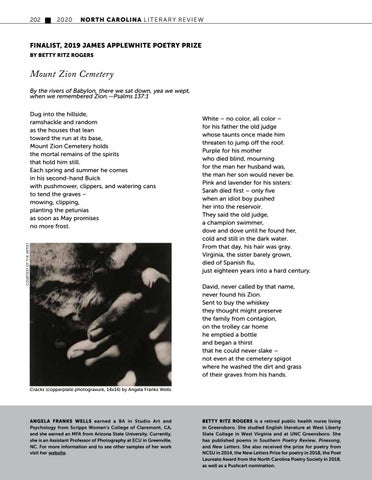 Mount Zion Cemetery By the rivers of Babylon, there we sat down, yea we wept, when we remembered Zion.—Psalms 137:1

Dug into the hillside, ramshackle and random as the houses that lean toward the run at its base, Mount Zion Cemetery holds the mortal remains of the spirits that hold him still. Each spring and summer he comes in his second-hand Buick with pushmower, clippers, and watering cans to tend the graves – mowing, clipping, planting the petunias as soon as May promises no more frost.

White – no color, all color – for his father the old judge whose taunts once made him threaten to jump off the roof. Purple for his mother who died blind, mourning for the man her husband was, the man her son would never be. Pink and lavender for his sisters: Sarah died first – only five when an idiot boy pushed her into the reservoir. They said the old judge, a champion swimmer, dove and dove until he found her, cold and still in the dark water. From that day, his hair was gray. Virginia, the sister barely grown, died of Spanish flu, just eighteen years into a hard century. David, never called by that name, never found his Zion. Sent to buy the whiskey they thought might preserve the family from contagion, on the trolley car home he emptied a bottle and began a thirst that he could never slake – not even at the cemetery spigot where he washed the dirt and grass of their graves from his hands.

ANGELA FRANKS WELLS earned a BA in Studio Art and Psychology from Scripps Women’s College of Claremont, CA, and she earned an MFA from Arizona State University. Currently, she is an Assistant Professor of Photography at ECU in Greenville, NC. For more information and to see other samples of her work visit her website.

BETTY RITZ ROGERS is a retired public health nurse living in Greensboro. She studied English literature at West Liberty State College in West Virginia and at UNC Greensboro. She has published poems in Southern Poetry Review, Pinesong, and New Letters. She also received the prize for poetry from NCSU in 2014, the New Letters Prize for poetry in 2018, the Poet Laureate Award from the North Carolina Poetry Society in 2018, as well as a Pushcart nomination.