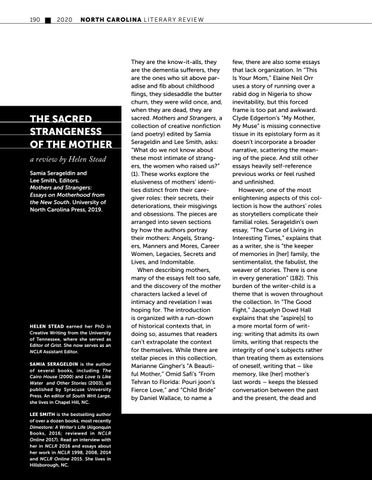 THE SACRED STRANGENESS OF THE MOTHER a review by Helen Stead Samia Serageldin and Lee Smith, Editors. Mothers and Strangers: Essays on Motherhood from the New South. University of North Carolina Press, 2019.

HELEN STEAD earned her PhD in Creative Writing from the University of Tennessee, where she served as Editor of Grist. She now serves as an NCLR Assistant Editor. SAMIA SERAGELDIN is the author of several books, including The Cairo House (2000) and Love Is Like Water and Other Stories (2003), all published by Syracuse University Press. An editor of South Writ Large, she lives in Chapel Hill, NC. LEE SMITH is the bestselling author of over a dozen books, most recently Dimestore: A Writer’s Life (Algonquin Books, 2016; reviewed in NCLR Online 2017). Read an interview with her in NCLR 2016 and essays about her work in NCLR 1998, 2008, 2014 and NCLR Online 2015. She lives in Hillsborough, NC.

They are the know-it-alls, they are the dementia sufferers, they are the ones who sit above paradise and fib about childhood flings, they sidesaddle the butter churn, they were wild once, and, when they are dead, they are sacred. Mothers and Strangers, a collection of creative nonfiction (and poetry) edited by Samia Serageldin and Lee Smith, asks: “What do we not know about these most intimate of strangers, the women who raised us?” (1). These works explore the elusiveness of mothers’ identities distinct from their caregiver roles: their secrets, their deteriorations, their misgivings and obsessions. The pieces are arranged into seven sections by how the authors portray their mothers: Angels, Strangers, Manners and Mores, Career Women, Legacies, Secrets and Lives, and Indomitable. When describing mothers, many of the essays felt too safe, and the discovery of the mother characters lacked a level of intimacy and revelation I was hoping for. The introduction is organized with a run-down of historical contexts that, in doing so, assumes that readers can’t extrapolate the context for themselves. While there are stellar pieces in this collection, Marianne Gingher’s “A Beautiful Mother,” Omid Safi’s “From Tehran to Florida: Pouri joon’s Fierce Love,” and “Child Bride” by Daniel Wallace, to name a

few, there are also some essays that lack organization. In “This Is Your Mom,” Elaine Neil Orr uses a story of running over a rabid dog in Nigeria to show inevitability, but this forced frame is too pat and awkward. Clyde Edgerton’s “My Mother, My Muse” is missing connective tissue in its epistolary form as it doesn’t incorporate a broader narrative, scattering the meaning of the piece. And still other essays heavily self-reference previous works or feel rushed and unfinished. However, one of the most enlightening aspects of this collection is how the authors’ roles as storytellers complicate their familial roles. Serageldin’s own essay, “The Curse of Living in Interesting Times,” explains that as a writer, she is “the keeper of memories in [her] family, the sentimentalist, the fabulist, the weaver of stories. There is one in every generation” (182). This burden of the writer-child is a theme that is woven throughout the collection. In “The Good Fight,” Jacquelyn Dowd Hall explains that she “aspire[s] to a more mortal form of writing: writing that admits its own limits, writing that respects the integrity of one’s subjects rather than treating them as extensions of oneself, writing that – like memory, like [her] mother’s last words – keeps the blessed conversation between the past and the present, the dead and