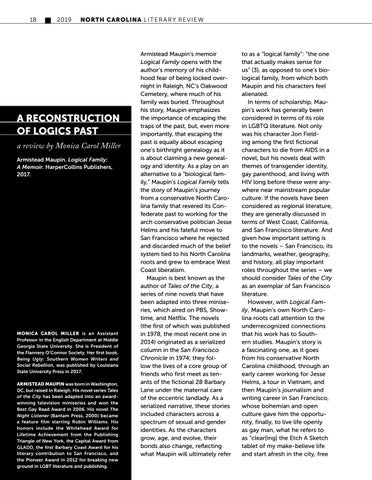 A RECONSTRUCTION OF LOGICS PAST a review by Monica Carol Miller Armistead Maupin. Logical Family: A Memoir. HarperCollins Publishers, 2017.

MONICA CAROL MILLER is an Assistant Professor in the English Department at Middle Georgia State University. She is President of the Flannery O’Connor Society. Her first book, Being Ugly: Southern Women Writers and Social Rebellion, was published by Louisiana State University Press in 2017. ARMISTEAD MAUPIN was born in Washington, DC, but raised in Raleigh. His novel series Tales of the City has been adapted into an awardwinning television miniseries and won the Best Gay Read Award in 2006. His novel The Night Listener (Bantam Press, 2000) became a feature film starring Robin Williams. His honors include the Whitehead Award for Lifetime Achievement from the Publishing Triangle of New York, the Capital Award from GLADD, the first Barbary Coast Award for his literary contribution to San Francisco, and the Pioneer Award in 2012 for breaking new ground in LGBT literature and publishing.

Armistead Maupin’s memoir Logical Family opens with the author’s memory of his childhood fear of being locked overnight in Raleigh, NC’s Oakwood Cemetery, where much of his family was buried. Throughout his story, Maupin emphasizes the importance of escaping the traps of the past, but, even more importantly, that escaping the past is equally about escaping one’s birthright genealogy as it is about claiming a new genealogy and identity. As a play on an alternative to a “biological family,” Maupin’s Logical Family tells the story of Maupin’s journey from a conservative North Carolina family that revered its Confederate past to working for the arch conservative politician Jesse Helms and his fateful move to San Francisco where he rejected and discarded much of the belief system tied to his North Carolina roots and grew to embrace West Coast liberalism. Maupin is best known as the author of Tales of the City, a series of nine novels that have been adapted into three miniseries, which aired on PBS, Showtime, and Netflix. The novels (the first of which was published in 1978, the most recent one in 2014) originated as a serialized column in the San Francisco Chronicle in 1974; they follow the lives of a core group of friends who first meet as tenants of the fictional 28 Barbary Lane under the maternal care of the eccentric landlady. As a serialized narrative, these stories included characters across a spectrum of sexual and gender identities. As the characters grow, age, and evolve, their bonds also change, reflecting what Maupin will ultimately refer

to as a “logical family”: “the one that actually makes sense for us” (3), as opposed to one’s biological family, from which both Maupin and his characters feel alienated. In terms of scholarship, Maupin’s work has generally been considered in terms of its role in LGBTQ literature. Not only was his character Jon Fielding among the first fictional characters to die from AIDS in a novel, but his novels deal with themes of transgender identity, gay parenthood, and living with HIV long before these were anywhere near mainstream popular culture. If the novels have been considered as regional literature, they are generally discussed in terms of West Coast, California, and San Francisco literature. And given how important setting is to the novels – San Francisco, its landmarks, weather, geography, and history, all play important roles throughout the series – we should consider Tales of the City as an exemplar of San Francisco literature. However, with Logical Family, Maupin’s own North Carolina roots call attention to the underrecognized connections that his work has to Southern studies. Maupin’s story is a fascinating one, as it goes from his conservative North Carolina childhood, through an early career working for Jesse Helms, a tour in Vietnam, and then Maupin’s journalism and writing career in San Francisco, whose bohemian and open culture gave him the opportunity, finally, to live life openly as gay man, what he refers to as “clear[ing] the Etch A Sketch tablet of my make-believe life and start afresh in the city, free