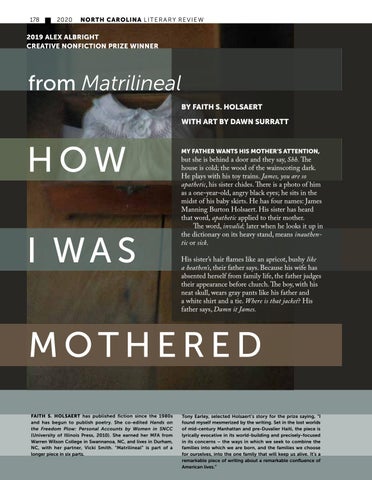 from Matrilineal BY FAITH S. HOLSAERT WITH ART BY DAWN SURRATT

HOW I WA S

MY FATHER WANTS HIS MOTHER’S ATTENTION,

but she is behind a door and they say, Shh. The house is cold; the wood of the wainscoting dark. He plays with his toy trains. James, you are so apathetic, his sister chides. There is a photo of him as a one-year-old, angry black eyes; he sits in the midst of his baby skirts. He has four names: James Manning Burton Holsaert. His sister has heard that word, apathetic applied to their mother. The word, invalid; later when he looks it up in the dictionary on its heavy stand, means inauthentic or sick. His sister’s hair flames like an apricot, bushy like a heathen’s, their father says. Because his wife has absented herself from family life, the father judges their appearance before church. The boy, with his neat skull, wears gray pants like his father and a white shirt and a tie. Where is that jacket? His father says, Damn it James.

MOTHERED FAITH S. HOLSAERT has published fiction since the 1980s and has begun to publish poetry. She co-edited Hands on the Freedom Plow: Personal Accounts by Women in SNCC (University of Illinois Press, 2010). She earned her MFA from Warren Wilson College in Swannanoa, NC, and lives in Durham, NC, with her partner, Vicki Smith. “Matrilineal” is part of a longer piece in six parts.

Tony Earley, selected Holsaert’s story for the prize saying, “I found myself mesmerized by the writing. Set in the lost worlds of mid-century Manhattan and pre-Duvalier Haiti, the piece is lyrically evocative in its world-building and precisely-focused in its concerns – the ways in which we seek to combine the families into which we are born, and the families we choose for ourselves, into the one family that will keep us alive. It’s a remarkable piece of writing about a remarkable confluence of American lives.”