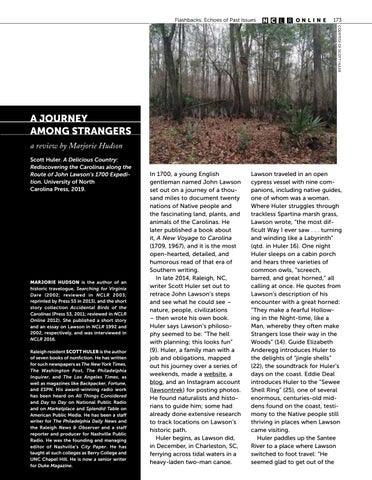 A JOURNEY AMONG STRANGERS a review by Marjorie Hudson Scott Huler. A Delicious Country: Rediscovering the Carolinas along the Route of John Lawson’s 1700 Expedition. University of North Carolina Press, 2019.

MARJORIE HUDSON is the author of an historic travelogue, Searching for Virginia Dare (2002; reviewed in NCLR 2003; reprinted by Press 53 in 2013), and the short story collection Accidental Birds of the Carolinas (Press 53, 2011; reviewed in NCLR Online 2012). She published a short story and an essay on Lawson in NCLR 1992 and 2002, respectively, and was interviewed in NCLR 2016. Raleigh resident SCOTT HULER is the author of seven books of nonfiction. He has written for such newspapers as The New York Times, The Washington Post, The Philadelphia Inquirer, and The Los Angeles Times, as well as magazines like Backpacker, Fortune, and ESPN. His award-winning radio work has been heard on All Things Considered and Day to Day on National Public Radio and on Marketplace and Splendid Table on American Public Media. He has been a staff writer for The Philadelphia Daily News and the Raleigh News &amp; Observer and a staff reporter and producer for Nashville Public Radio. He was the founding and managing editor of Nashville’s City Paper. He has taught at such colleges as Berry College and UNC Chapel Hill. He is now a senior writer for Duke Magazine.

In 1700, a young English gentleman named John Lawson set out on a journey of a thousand miles to document twenty nations of Native people and the fascinating land, plants, and animals of the Carolinas. He later published a book about it, A New Voyage to Carolina (1709, 1967), and it is the most open-hearted, detailed, and humorous read of that era of Southern writing. In late 2014, Raleigh, NC, writer Scott Huler set out to retrace John Lawson’s steps and see what he could see – nature, people, civilizations – then wrote his own book. Huler says Lawson’s philosophy seemed to be: “The hell with planning; this looks fun” (9). Huler, a family man with a job and obligations, mapped out his journey over a series of weekends, made a website, a blog, and an Instagram account (lawsontrek) for posting photos. He found naturalists and historians to guide him; some had already done extensive research to track locations on Lawson’s historic path. Huler begins, as Lawson did, in December, in Charleston, SC, ferrying across tidal waters in a heavy-laden two-man canoe.

Lawson traveled in an open cypress vessel with nine companions, including native guides, one of whom was a woman. Where Huler struggles through trackless Spartina marsh grass, Lawson wrote, “the most difficult Way I ever saw . . . turning and winding like a Labyrinth” (qtd. in Huler 16). One night Huler sleeps on a cabin porch and hears three varieties of common owls, “screech, barred, and great horned,” all calling at once. He quotes from Lawson’s description of his encounter with a great horned: “They make a fearful Hollowing in the Night-time, like a Man, whereby they often make Strangers lose their way in the Woods” (14). Guide Elizabeth Anderegg introduces Huler to the delights of “jingle shells” (22), the soundtrack for Huler’s days on the coast. Eddie Deal introduces Huler to the “Sewee Shell Ring” (25), one of several enormous, centuries-old middens found on the coast, testimony to the Native people still thriving in places when Lawson came visiting. Huler paddles up the Santee River to a place where Lawson switched to foot travel: “He seemed glad to get out of the