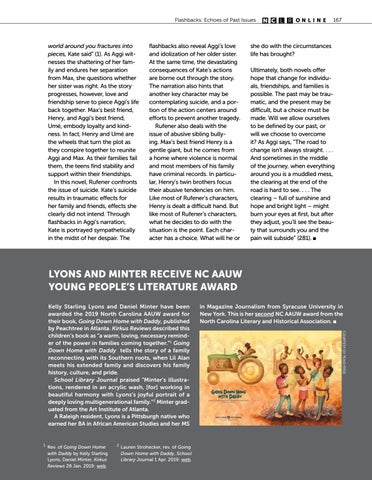 world around you fractures into pieces, Kate said” (1). As Aggi witnesses the shattering of her family and endures her separation from Max, she questions whether her sister was right. As the story progresses, however, love and friendship serve to piece Aggi’s life back together. Max’s best friend, Henry, and Aggi’s best friend, Umé, embody loyalty and kindness. In fact, Henry and Umé are the wheels that turn the plot as they conspire together to reunite Aggi and Max. As their families fail them, the teens find stability and support within their friendships. In this novel, Rufener confronts the issue of suicide. Kate’s suicide results in traumatic effects for her family and friends, effects she clearly did not intend. Through flashbacks in Aggi’s narration, Kate is portrayed sympathetically in the midst of her despair. The

flashbacks also reveal Aggi’s love and idolization of her older sister. At the same time, the devastating consequences of Kate’s actions are borne out through the story. The narration also hints that another key character may be contemplating suicide, and a portion of the action centers around efforts to prevent another tragedy. Rufener also deals with the issue of abusive sibling bullying. Max’s best friend Henry is a gentle giant, but he comes from a home where violence is normal and most members of his family have criminal records. In particular, Henry’s twin brothers focus their abusive tendencies on him. Like most of Rufener’s characters, Henry is dealt a difficult hand. But like most of Rufener’s characters, what he decides to do with the situation is the point. Each character has a choice. What will he or

she do with the circumstances life has brought? Ultimately, both novels offer hope that change for individuals, friendships, and families is possible. The past may be traumatic, and the present may be difficult, but a choice must be made. Will we allow ourselves to be defined by our past, or will we choose to overcome it? As Aggi says, “The road to change isn’t always straight. . . . And sometimes in the middle of the journey, when everything around you is a muddled mess, the clearing at the end of the road is hard to see. . . . The clearing – full of sunshine and hope and bright light – might burn your eyes at first, but after they adjust, you’ll see the beauty that surrounds you and the pain will subside” (281). n

in Magazine Journalism from Syracuse University in New York. This is her second NC AAUW award from the North Carolina Literary and Historical Association. n COURTESY OF PEACHTREE

Kelly Starling Lyons and Daniel Minter have been awarded the 2019 North Carolina AAUW award for their book, Going Down Home with Daddy, published by Peachtree in Atlanta. Kirkus Reviews described this children’s book as “a warm, loving, necessary reminder of the power in families coming together.”1 Going Down Home with Daddy tells the story of a family reconnecting with its Southern roots, when Lil Alan meets his extended family and discovers his family history, culture, and pride. School Library Journal praised “Minter’s illustrations, rendered in an acrylic wash, [for] working in beautiful harmony with Lyons’s joyful portrait of a deeply loving multigenerational family.”2 Minter graduated from the Art Institute of Atlanta. A Raleigh resident, Lyons is a Pittsburgh native who earned her BA in African American Studies and her MS