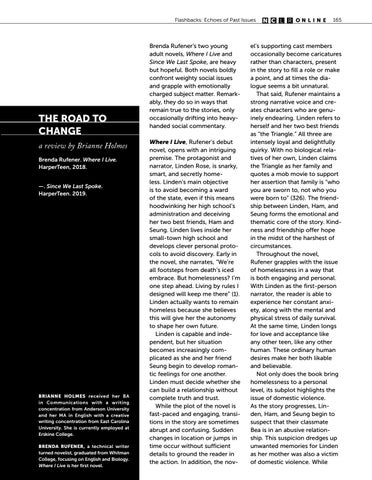 THE ROAD TO CHANGE a review by Brianne Holmes Brenda Rufener. Where I Live. HarperTeen, 2018. —. Since We Last Spoke. HarperTeen. 2019.

BRIANNE HOLMES received her BA in Communications with a writing concentration from Anderson University and her MA in English with a creative writing concentration from East Carolina University. She is currently employed at Erskine College. BRENDA RUFENER, a technical writer turned novelist, graduated from Whitman College, focusing on English and Biology. Where I Live is her first novel.

Brenda Rufener’s two young adult novels, Where I Live and Since We Last Spoke, are heavy but hopeful. Both novels boldly confront weighty social issues and grapple with emotionally charged subject matter. Remarkably, they do so in ways that remain true to the stories, only occasionally drifting into heavyhanded social commentary. Where I Live, Rufener’s debut novel, opens with an intriguing premise. The protagonist and narrator, Linden Rose, is snarky, smart, and secretly homeless. Linden’s main objective is to avoid becoming a ward of the state, even if this means hoodwinking her high school’s administration and deceiving her two best friends, Ham and Seung. Linden lives inside her small-town high school and develops clever personal protocols to avoid discovery. Early in the novel, she narrates, “We’re all footsteps from death’s iced embrace. But homelessness? I’m one step ahead. Living by rules I designed will keep me there” (1). Linden actually wants to remain homeless because she believes this will give her the autonomy to shape her own future. Linden is capable and independent, but her situation becomes increasingly complicated as she and her friend Seung begin to develop romantic feelings for one another. Linden must decide whether she can build a relationship without complete truth and trust. While the plot of the novel is fast-paced and engaging, transitions in the story are sometimes abrupt and confusing. Sudden changes in location or jumps in time occur without sufficient details to ground the reader in the action. In addition, the nov-

el’s supporting cast members occasionally become caricatures rather than characters, present in the story to fill a role or make a point, and at times the dialogue seems a bit unnatural. That said, Rufener maintains a strong narrative voice and creates characters who are genuinely endearing. Linden refers to herself and her two best friends as “the Triangle.” All three are intensely loyal and delightfully quirky. With no biological relatives of her own, Linden claims the Triangle as her family and quotes a mob movie to support her assertion that family is “who you are sworn to, not who you were born to” (326). The friendship between Linden, Ham, and Seung forms the emotional and thematic core of the story. Kindness and friendship offer hope in the midst of the harshest of circumstances. Throughout the novel, Rufener grapples with the issue of homelessness in a way that is both engaging and personal. With Linden as the first-person narrator, the reader is able to experience her constant anxiety, along with the mental and physical stress of daily survival. At the same time, Linden longs for love and acceptance like any other teen, like any other human. These ordinary human desires make her both likable and believable. Not only does the book bring homelessness to a personal level, its subplot highlights the issue of domestic violence. As the story progresses, Linden, Ham, and Seung begin to suspect that their classmate Bea is in an abusive relationship. This suspicion dredges up unwanted memories for Linden as her mother was also a victim of domestic violence. While