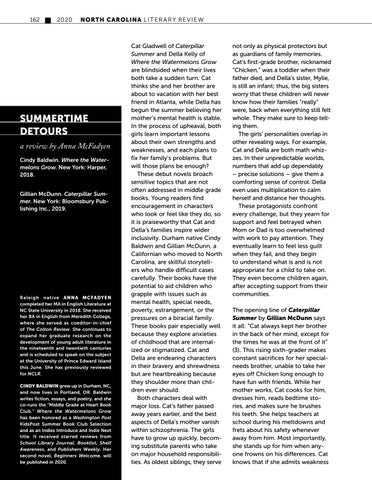 Raleigh native ANNA MCFADYEN completed her MA in English Literature at NC State University in 2018. She received her BA in English from Meredith College, where she served as coeditor-in-chief of The Colton Review. She continues to expand her graduate research on the development of young adult literature in the nineteenth and twentieth centuries and is scheduled to speak on the subject at the University of Prince Edward Island this June. She has previously reviewed for NCLR. CINDY BALDWIN grew up in Durham, NC, and now lives in Portland, OR. Baldwin writes fiction, essays, and poetry, and she co-runs the “Middle Grade at Heart Book Club.” Where the Watermelons Grow has been honored as a Washington Post KidsPost Summer Book Club Selection and as an Indies Introduce and Indie Next title. It received starred reviews from School Library Journal, Booklist, Shelf Awareness, and Publishers Weekly. Her second novel, Beginners Welcome, will be published in 2020.

Cat Gladwell of Caterpillar Summer and Della Kelly of Where the Watermelons Grow are blindsided when their lives both take a sudden turn. Cat thinks she and her brother are about to vacation with her best friend in Atlanta, while Della has begun the summer believing her mother’s mental health is stable. In the process of upheaval, both girls learn important lessons about their own strengths and weaknesses, and each plans to fix her family’s problems. But will those plans be enough? These debut novels broach sensitive topics that are not often addressed in middle grade books. Young readers find encouragement in characters who look or feel like they do, so it is praiseworthy that Cat and Della’s families inspire wider inclusivity. Durham native Cindy Baldwin and Gillian McDunn, a Californian who moved to North Carolina, are skillful storytellers who handle difficult cases carefully. Their books have the potential to aid children who grapple with issues such as mental health, special needs, poverty, estrangement, or the pressures on a biracial family. These books pair especially well because they explore anxieties of childhood that are internalized or stigmatized. Cat and Della are endearing characters in their bravery and shrewdness but are heartbreaking because they shoulder more than children ever should. Both characters deal with major loss. Cat’s father passed away years earlier, and the best aspects of Della’s mother vanish within schizophrenia. The girls have to grow up quickly, becoming substitute parents who take on major household responsibilities. As oldest siblings, they serve

not only as physical protectors but as guardians of family memories. Cat’s first-grade brother, nicknamed “Chicken,” was a toddler when their father died, and Della’s sister, Mylie, is still an infant; thus, the big sisters worry that these children will never know how their families “really” were, back when everything still felt whole. They make sure to keep telling them. The girls’ personalities overlap in other revealing ways. For example, Cat and Della are both math whizzes. In their unpredictable worlds, numbers that add up dependably – precise solutions – give them a comforting sense of control. Della even uses multiplication to calm herself and distance her thoughts. These protagonists confront every challenge, but they yearn for support and feel betrayed when Mom or Dad is too overwhelmed with work to pay attention. They eventually learn to feel less guilt when they fail, and they begin to understand what is and is not appropriate for a child to take on. They even become children again, after accepting support from their communities. The opening line of Caterpillar Summer by Gillian McDunn says it all: “Cat always kept her brother in the back of her mind, except for the times he was at the front of it” (3). This rising sixth-grader makes constant sacrifices for her specialneeds brother, unable to take her eyes off Chicken long enough to have fun with friends. While her mother works, Cat cooks for him, dresses him, reads bedtime stories, and makes sure he brushes his teeth. She helps teachers at school during his meltdowns and frets about his safety whenever away from him. Most importantly, she stands up for him when anyone frowns on his differences. Cat knows that if she admits weakness