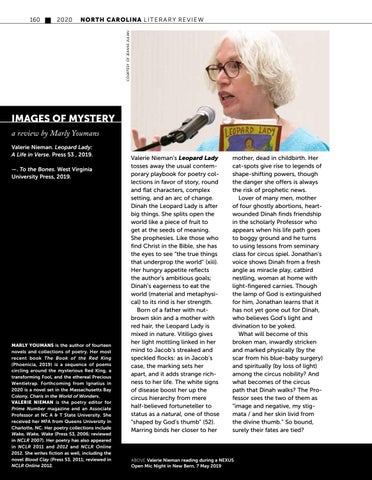 MARLY YOUMANS is the author of fourteen novels and collections of poetry. Her most recent book The Book of the Red King (Phoenicia, 2019) is a sequence of poems circling around the mysterious Red King, a transforming Fool, and the ethereal Precious Wentletrap. Forthcoming from Ignatius in 2020 is a novel set in the Massachusetts Bay Colony, Charis in the World of Wonders. VALERIE NIEMAN is the poetry editor for Prime Number magazine and an Associate Professor at NC A & T State University. She received her MFA from Queens University in Charlotte, NC. Her poetry collections include Wake, Wake, Wake (Press 53, 2006; reviewed in NCLR 2007). Her poetry has also appeared in NCLR 2011 and 2012 and NCLR Online 2012. She writes fiction as well, including the novel Blood Clay (Press 53, 2011; reviewed in NCLR Online 2012.

Valerie Nieman’s Leopard Lady tosses away the usual contemporary playbook for poetry collections in favor of story, round and flat characters, complex setting, and an arc of change. Dinah the Leopard Lady is after big things. She splits open the world like a piece of fruit to get at the seeds of meaning. She prophesies. Like those who find Christ in the Bible, she has the eyes to see “the true things that underprop the world” (xiii). Her hungry appetite reflects the author’s ambitious goals; Dinah’s eagerness to eat the world (material and metaphysical) to its rind is her strength. Born of a father with nutbrown skin and a mother with red hair, the Leopard Lady is mixed in nature. Vitiligo gives her light mottling linked in her mind to Jacob’s streaked and speckled flocks: as in Jacob’s case, the marking sets her apart, and it adds strange richness to her life. The white signs of disease boost her up the circus hierarchy from mere half-believed fortuneteller to status as a natural, one of those “shaped by God’s thumb” (52). Marring binds her closer to her

mother, dead in childbirth. Her cat-spots give rise to legends of shape-shifting powers, though the danger she offers is always the risk of prophetic news. Lover of many men, mother of four ghostly abortions, heartwounded Dinah finds friendship in the scholarly Professor who appears when his life path goes to boggy ground and he turns to using lessons from seminary class for circus spiel. Jonathan’s voice shows Dinah from a fresh angle as miracle play, catbird nestling, woman at home with light-fingered carnies. Though the lamp of God is extinguished for him, Jonathan learns that it has not yet gone out for Dinah, who believes God’s light and divination to be yoked. What will become of this broken man, inwardly stricken and marked physically (by the scar from his blue-baby surgery) and spiritually (by loss of light) among the circus nobility? And what becomes of the circus path that Dinah walks? The Professor sees the two of them as “image and negative, my stigmata / and her skin livid from the divine thumb.” So bound, surely their fates are tied?

ABOVE Valerie Nieman reading during a NEXUS Open Mic Night in New Bern, 7 May 2019