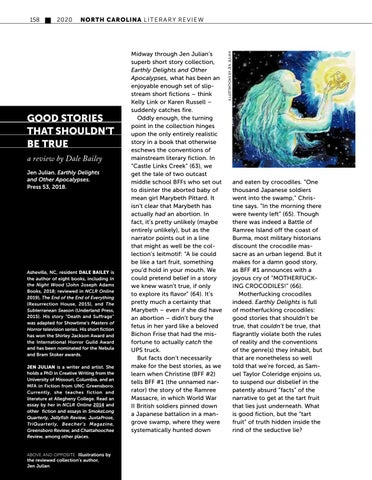 GOOD STORIES THAT SHOULDN’T BE TRUE a review by Dale Bailey Jen Julian. Earthly Delights and Other Apocalypses. Press 53, 2018.

Asheville, NC, resident DALE BAILEY is the author of eight books, including In the Night Wood (John Joseph Adams Books, 2018; reviewed in NCLR Online 2019), The End of the End of Everything (Resurrection House, 2015), and The Subterranean Season (Underland Press, 2015). His story “Death and Suffrage” was adapted for Showtime’s Masters of Horror television series. His short fiction has won the Shirley Jackson Award and the International Horror Guild Award and has been nominated for the Nebula and Bram Stoker awards. JEN JULIAN is a writer and artist. She holds a PhD in Creative Writing from the University of Missouri, Columbia, and an MFA in Fiction from UNC Greensboro. Currently, she teaches fiction and literature at Allegheny College. Read an essay by her in NCLR Online 2014 and other fiction and essays in SmokeLong Quarterly, Jellyfish Review, JuxtaProse, TriQuarterly, Beecher’s Magazine, Greensboro Review, and Chattahoochee Review, among other places.

ABOVE AND OPPOSITE Illustrations by the reviewed collection’s author, Jen Julian

Midway through Jen Julian’s superb short story collection, Earthly Delights and Other Apocalypses, what has been an enjoyable enough set of slipstream short fictions – think Kelly Link or Karen Russell – suddenly catches fire. Oddly enough, the turning point in the collection hinges upon the only entirely realistic story in a book that otherwise eschews the conventions of mainstream literary fiction. In “Castle Links Creek” (63), we get the tale of two outcast middle school BFFs who set out to disinter the aborted baby of mean girl Marybeth Pittard. It isn’t clear that Marybeth has actually had an abortion. In fact, it’s pretty unlikely (maybe entirely unlikely), but as the narrator points out in a line that might as well be the collection’s leitmotif: “A lie could be like a tart fruit, something you’d hold in your mouth. We could pretend belief in a story we knew wasn’t true, if only to explore its flavor” (64). It’s pretty much a certainty that Marybeth – even if she did have an abortion – didn’t bury the fetus in her yard like a beloved Bichon Frise that had the misfortune to actually catch the UPS truck. But facts don’t necessarily make for the best stories, as we learn when Christine (BFF #2) tells BFF #1 (the unnamed narrator) the story of the Ramree Massacre, in which World War II British soldiers pinned down a Japanese battalion in a mangrove swamp, where they were systematically hunted down

and eaten by crocodiles. “One thousand Japanese soldiers went into the swamp,” Christine says. “In the morning there were twenty left” (65). Though there was indeed a Battle of Ramree Island off the coast of Burma, most military historians discount the crocodile massacre as an urban legend. But it makes for a damn good story, as BFF #1 announces with a joyous cry of “MOTHERFUCKING CROCODILES!” (66). Motherfucking crocodiles indeed. Earthly Delights is full of motherfucking crocodiles: good stories that shouldn’t be true, that couldn’t be true, that flagrantly violate both the rules of reality and the conventions of the genre(s) they inhabit, but that are nonetheless so well told that we’re forced, as Samuel Taylor Coleridge enjoins us, to suspend our disbelief in the patently absurd “facts” of the narrative to get at the tart fruit that lies just underneath. What is good fiction, but the “tart fruit” of truth hidden inside the rind of the seductive lie?