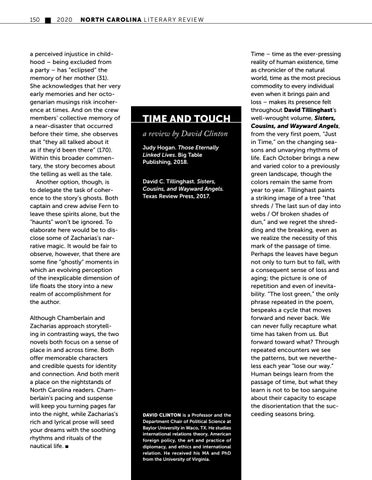 a perceived injustice in childhood – being excluded from a party – has “eclipsed” the memory of her mother (31). She acknowledges that her very early memories and her octogenarian musings risk incoherence at times. And on the crew members’ collective memory of a near-disaster that occurred before their time, she observes that “they all talked about it as if they’d been there” (170). Within this broader commentary, the story becomes about the telling as well as the tale. Another option, though, is to delegate the task of coherence to the story’s ghosts. Both captain and crew advise Fern to leave these spirits alone, but the “haunts” won’t be ignored. To elaborate here would be to disclose some of Zacharias’s narrative magic. It would be fair to observe, however, that there are some fine “ghostly” moments in which an evolving perception of the inexplicable dimension of life floats the story into a new realm of accomplishment for the author. Although Chamberlain and Zacharias approach storytelling in contrasting ways, the two novels both focus on a sense of place in and across time. Both offer memorable characters and credible quests for identity and connection. And both merit a place on the nightstands of North Carolina readers. Chamberlain’s pacing and suspense will keep you turning pages far into the night, while Zacharias’s rich and lyrical prose will seed your dreams with the soothing rhythms and rituals of the nautical life. n

Time – time as the ever-pressing reality of human existence, time as chronicler of the natural world, time as the most precious commodity to every individual even when it brings pain and loss – makes its presence felt throughout David Tillinghast’s well-wrought volume, Sisters, Cousins, and Wayward Angels, from the very first poem, “Just in Time,” on the changing seasons and unvarying rhythms of life. Each October brings a new and varied color to a previously green landscape, though the colors remain the same from year to year. Tillinghast paints a striking image of a tree “that shreds / The last sun of day into webs / Of broken shades of dun,” and we regret the shredding and the breaking, even as we realize the necessity of this mark of the passage of time. Perhaps the leaves have begun not only to turn but to fall, with a consequent sense of loss and aging; the picture is one of repetition and even of inevitability. “The lost green,” the only phrase repeated in the poem, bespeaks a cycle that moves forward and never back. We can never fully recapture what time has taken from us. But forward toward what? Through repeated encounters we see the patterns, but we nevertheless each year “lose our way.” Human beings learn from the passage of time, but what they learn is not to be too sanguine about their capacity to escape the disorientation that the succeeding seasons bring.