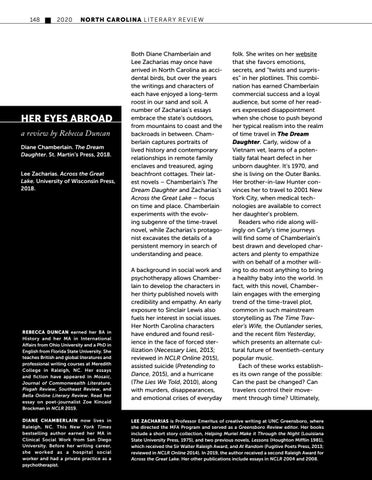 REBECCA DUNCAN earned her BA in History and her MA in International Affairs from Ohio University and a PhD in English from Florida State University. She teaches British and global literatures and professional writing courses at Meredith College in Raleigh, NC. Her essays and fiction have appeared in Mosaic, Journal of Commonwealth Literature, Pisgah Review, Southeast Review, and Bella Online Literary Review. Read her essay on poet-journalist Zoe Kincaid Brockman in NCLR 2019. DIANE CHAMBERLAIN now lives in Raleigh, NC. This New York Times bestselling author earned her MA in Clinical Social Work from San Diego University. Before her writing career, she worked as a hospital social worker and had a private practice as a psychotherapist.

Both Diane Chamberlain and Lee Zacharias may once have arrived in North Carolina as accidental birds, but over the years the writings and characters of each have enjoyed a long-term roost in our sand and soil. A number of Zacharias’s essays embrace the state’s outdoors, from mountains to coast and the backroads in between. Chamberlain captures portraits of lived history and contemporary relationships in remote family enclaves and treasured, aging beachfront cottages. Their latest novels – Chamberlain’s The Dream Daughter and Zacharias’s Across the Great Lake – focus on time and place. Chamberlain experiments with the evolving subgenre of the time-travel novel, while Zacharias’s protagonist excavates the details of a persistent memory in search of understanding and peace. A background in social work and psychotherapy allows Chamberlain to develop the characters in her thirty published novels with credibility and empathy. An early exposure to Sinclair Lewis also fuels her interest in social issues. Her North Carolina characters have endured and found resilience in the face of forced sterilization (Necessary Lies, 2013; reviewed in NCLR Online 2015), assisted suicide (Pretending to Dance, 2015), and a hurricane (The Lies We Told, 2010), along with murders, disappearances, and emotional crises of everyday

folk. She writes on her website that she favors emotions, secrets, and “twists and surprises” in her plotlines. This combination has earned Chamberlain commercial success and a loyal audience, but some of her readers expressed disappointment when she chose to push beyond her typical realism into the realm of time travel in The Dream Daughter. Carly, widow of a Vietnam vet, learns of a potentially fatal heart defect in her unborn daughter. It’s 1970, and she is living on the Outer Banks. Her brother-in-law Hunter convinces her to travel to 2001 New York City, when medical technologies are available to correct her daughter’s problem. Readers who ride along willingly on Carly’s time journeys will find some of Chamberlain’s best drawn and developed characters and plenty to empathize with on behalf of a mother willing to do most anything to bring a healthy baby into the world. In fact, with this novel, Chamberlain engages with the emerging trend of the time-travel plot, common in such mainstream storytelling as The Time Traveler’s Wife, the Outlander series, and the recent film Yesterday, which presents an alternate cultural future of twentieth-century popular music. Each of these works establishes its own range of the possible: Can the past be changed? Can travelers control their movement through time? Ultimately,

LEE ZACHARIAS is Professor Emeritus of creative writing at UNC Greensboro, where she directed the MFA Program and served as a Greensboro Review editor. Her books include a short story collection, Helping Muriel Make it Through the Night (Louisiana State University Press, 1975), and two previous novels, Lessons (Houghton Mifflin 1981), which received the Sir Walter Raleigh Award, and At Random (Fugitive Poets Press, 2013; reviewed in NCLR Online 2014). In 2019, the author received a second Raleigh Award for Across the Great Lake. Her other publications include essays in NCLR 2004 and 2008.