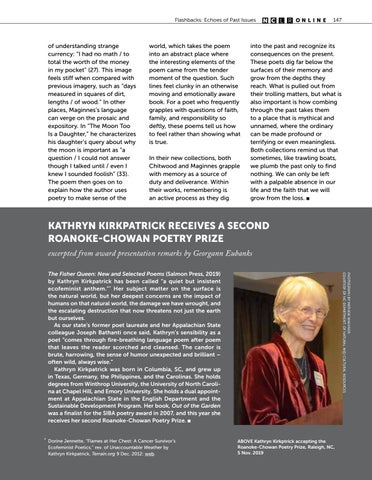 of understanding strange currency: “I had no math / to total the worth of the money in my pocket” (27). This image feels stiff when compared with previous imagery, such as “days measured in squares of dirt, lengths / of wood.” In other places, Maginnes’s language can verge on the prosaic and expository. In “The Moon Too Is a Daughter,” he characterizes his daughter’s query about why the moon is important as “a question / I could not answer though I talked until / even I knew I sounded foolish” (33). The poem then goes on to explain how the author uses poetry to make sense of the

world, which takes the poem into an abstract place where the interesting elements of the poem came from the tender moment of the question. Such lines feel clunky in an otherwise moving and emotionally aware book. For a poet who frequently grapples with questions of faith, family, and responsibility so deftly, these poems tell us how to feel rather than showing what is true. In their new collections, both Chitwood and Maginnes grapple with memory as a source of duty and deliverance. Within their works, remembering is an active process as they dig

into the past and recognize its consequences on the present. These poets dig far below the surfaces of their memory and grow from the depths they reach. What is pulled out from their trolling matters, but what is also important is how combing through the past takes them to a place that is mythical and unnamed, where the ordinary can be made profound or terrifying or even meaningless. Both collections remind us that sometimes, like trawling boats, we plumb the past only to find nothing. We can only be left with a palpable absence in our life and the faith that we will grow from the loss. n

PHOTOGRAPH BY MATHEW WAEHNER: COURTESY OF NC DEPARTMENT. OF NATURAL AND CULTURAL RESOURCES

The Fisher Queen: New and Selected Poems (Salmon Press, 2019) by Kathryn Kirkpatrick has been called “a quiet but insistent ecofeminist anthem.”* Her subject matter on the surface is the natural world, but her deepest concerns are the impact of humans on that natural world, the damage we have wrought, and the escalating destruction that now threatens not just the earth but ourselves. As our state’s former poet laureate and her Appalachian State colleague Joseph Bathanti once said, Kathryn’s sensibility as a poet “comes through fire-breathing language poem after poem that leaves the reader scorched and cleansed. The candor is brute, harrowing, the sense of humor unexpected and brilliant – often wild, always wise.” Kathryn Kirkpatrick was born in Columbia, SC, and grew up in Texas, Germany, the Philippines, and the Carolinas. She holds degrees from Winthrop University, the University of North Carolina at Chapel Hill, and Emory University. She holds a dual appointment at Appalachian State in the English Department and the Sustainable Development Program. Her book, Out of the Garden was a finalist for the SIBA poetry award in 2007, and this year she receives her second Roanoke-Chowan Poetry Prize. n