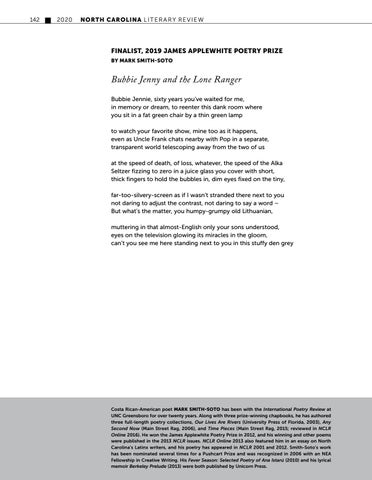 Bubbie Jenny and the Lone Ranger Bubbie Jennie, sixty years you’ve waited for me, in memory or dream, to reenter this dank room where you sit in a fat green chair by a thin green lamp to watch your favorite show, mine too as it happens, even as Uncle Frank chats nearby with Pop in a separate, transparent world telescoping away from the two of us at the speed of death, of loss, whatever, the speed of the Alka Seltzer fizzing to zero in a juice glass you cover with short, thick fingers to hold the bubbles in, dim eyes fixed on the tiny, far-too-silvery-screen as if I wasn’t stranded there next to you not daring to adjust the contrast, not daring to say a word – But what’s the matter, you humpy-grumpy old Lithuanian, muttering in that almost-English only your sons understood, eyes on the television glowing its miracles in the gloom, can’t you see me here standing next to you in this stuffy den grey

Costa Rican-American poet MARK SMITH-SOTO has been with the International Poetry Review at UNC Greensboro for over twenty years. Along with three prize-winning chapbooks, he has authored three full-length poetry collections, Our Lives Are Rivers (University Press of Florida, 2003), Any Second Now (Main Street Rag, 2006), and Time Pieces (Main Street Rag, 2015; reviewed in NCLR Online 2016). He won the James Applewhite Poetry Prize in 2012, and his winning and other poems were published in the 2013 NCLR issues. NCLR Online 2013 also featured him in an essay on North Carolina’s Latinx writers, and his poetry has appeared in NCLR 2001 and 2012. Smith-Soto’s work has been nominated several times for a Pushcart Prize and was recognized in 2006 with an NEA Fellowship in Creative Writing. His Fever Season: Selected Poetry of Ana Istarú (2010) and his lyrical memoir Berkeley Prelude (2013) were both published by Unicorn Press.