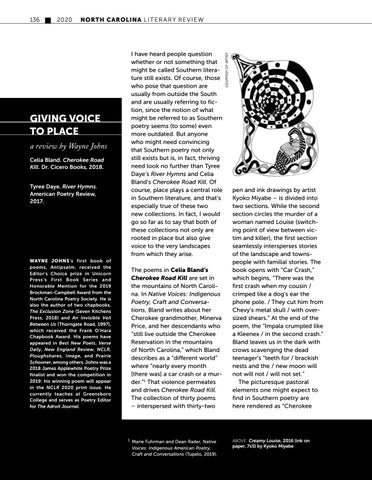 I have heard people question whether or not something that might be called Southern literature still exists. Of course, those who pose that question are usually from outside the South and are usually referring to fiction, since the notion of what might be referred to as Southern poetry seems (to some) even more outdated. But anyone who might need convincing that Southern poetry not only still exists but is, in fact, thriving need look no further than Tyree Daye’s River Hymns and Celia Bland’s Cherokee Road Kill. Of course, place plays a central role in Southern literature, and that’s especially true of these two new collections. In fact, I would go so far as to say that both of these collections not only are rooted in place but also give voice to the very landscapes from which they arise.

WAYNE JOHNS’s first book of poems, Antipsalm, received the Editor’s Choice prize in Unicorn Press’s First Book Series and Honorable Mention for the 2019 Brockman-Campbell Award from the North Carolina Poetry Society. He is also the author of two chapbooks, The Exclusion Zone (Seven Kitchens Press, 2018) and An Invisible Veil Between Us (Thorngate Road, 1997), which received the Frank O’Hara Chapbook Award. His poems have appeared in Best New Poets, Verse Daily, New England Review, NCLR, Ploughshares, Image, and Prairie Schooner, among others. Johns was a 2018 James Applewhite Poetry Prize finalist and won the competition in 2019: his winning poem will appear in the NCLR 2020 print issue. He currently teaches at Greensboro College and serves as Poetry Editor for The Adroit Journal.

The poems in Celia Bland’s Cherokee Road Kill are set in the mountains of North Carolina. In Native Voices: Indigenous Poetry, Craft and Conversations, Bland writes about her Cherokee grandmother, Minerva Price, and her descendants who “still live outside the Cherokee Reservation in the mountains of North Carolina,” which Bland describes as a “different world” where “nearly every month [there was] a car crash or a murder.”1 That violence permeates and drives Cherokee Road Kill. The collection of thirty poems – interspersed with thirty-two

pen and ink drawings by artist Kyoko Miyabe – is divided into two sections. While the second section circles the murder of a woman named Louise (switching point of view between victim and killer), the first section seamlessly intersperses stories of the landscape and townspeople with familial stories. The book opens with “Car Crash,” which begins, “There was the first crash when my cousin / crimped like a dog’s ear the phone pole. / They cut him from Chevy’s metal skull / with oversized shears.” At the end of the poem, the “Impala crumpled like a Kleenex / in the second crash.” Bland leaves us in the dark with crows scavenging the dead teenager’s “teeth for / brackish nests and the / new moon will not will not / will not set.” The picturesque pastoral elements one might expect to find in Southern poetry are here rendered as “Cherokee