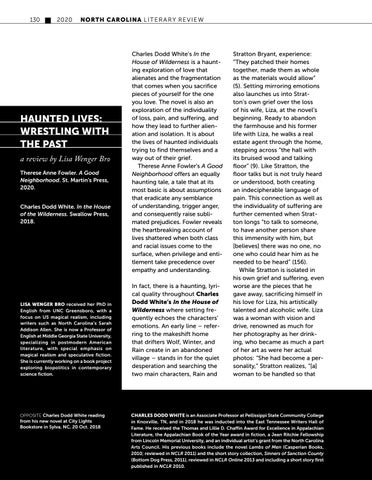 HAUNTED LIVES: WRESTLING WITH THE PAST a review by Lisa Wenger Bro Therese Anne Fowler. A Good Neighborhood. St. Martin’s Press, 2020. Charles Dodd White. In the House of the Wilderness. Swallow Press, 2018.

LISA WENGER BRO received her PhD in English from UNC Greensboro, with a focus on US magical realism, including writers such as North Carolina’s Sarah Addison Allen. She is now a Professor of English at Middle Georgia State University, specializing in postmodern American literature, with special emphasis on magical realism and speculative fiction. She is currently working on a book project exploring biopolitics in contemporary science fiction.

Charles Dodd White’s In the House of Wilderness is a haunting exploration of love that alienates and the fragmentation that comes when you sacrifice pieces of yourself for the one you love. The novel is also an exploration of the individuality of loss, pain, and suffering, and how they lead to further alienation and isolation. It is about the lives of haunted individuals trying to find themselves and a way out of their grief. Therese Anne Fowler’s A Good Neighborhood offers an equally haunting tale, a tale that at its most basic is about assumptions that eradicate any semblance of understanding, trigger anger, and consequently raise sublimated prejudices. Fowler reveals the heartbreaking account of lives shattered when both class and racial issues come to the surface, when privilege and entitlement take precedence over empathy and understanding. In fact, there is a haunting, lyrical quality throughout Charles Dodd White’s In the House of Wilderness where setting frequently echoes the characters’ emotions. An early line – referring to the makeshift home that drifters Wolf, Winter, and Rain create in an abandoned village – stands in for the quiet desperation and searching the two main characters, Rain and

Stratton Bryant, experience: “They patched their homes together, made them as whole as the materials would allow” (5). Setting mirroring emotions also launches us into Stratton’s own grief over the loss of his wife, Liza, at the novel’s beginning. Ready to abandon the farmhouse and his former life with Liza, he walks a real estate agent through the home, stepping across “the hall with its bruised wood and talking floor” (9). Like Stratton, the floor talks but is not truly heard or understood, both creating an indecipherable language of pain. This connection as well as the individuality of suffering are further cemented when Stratton longs “to talk to someone, to have another person share this immensity with him, but [believes] there was no one, no one who could hear him as he needed to be heard” (156). While Stratton is isolated in his own grief and suffering, even worse are the pieces that he gave away, sacrificing himself in his love for Liza, his artistically talented and alcoholic wife. Liza was a woman with vision and drive, renowned as much for her photography as her drinking, who became as much a part of her art as were her actual photos: “She had become a personality,” Stratton realizes, “[a] woman to be handled so that

CHARLES DODD WHITE is an Associate Professor at Pellissippi State Community College in Knoxville, TN, and in 2018 he was inducted into the East Tennessee Writers Hall of Fame. He received the Thomas and Lillie D. Chaffin Award for Excellence in Appalachian Literature, the Appalachian Book of the Year award in fiction, a Jean Ritchie Fellowship from Lincoln Memorial University, and an individual artist’s grant from the North Carolina Arts Council. His previous books include the novel Lambs of Men (Casperian Books, 2010; reviewed in NCLR 2011) and the short story collection, Sinners of Sanction County (Bottom Dog Press, 2011), reviewed in NCLR Online 2013 and including a short story first published in NCLR 2010.