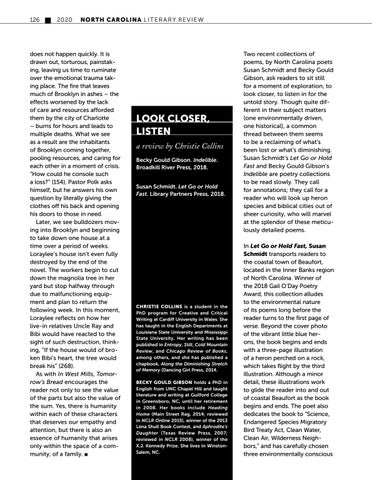 does not happen quickly. It is drawn out, torturous, painstaking, leaving us time to ruminate over the emotional trauma taking place. The fire that leaves much of Brooklyn in ashes – the effects worsened by the lack of care and resources afforded them by the city of Charlotte – burns for hours and leads to multiple deaths. What we see as a result are the inhabitants of Brooklyn coming together, pooling resources, and caring for each other in a moment of crisis. “How could he console such a loss?” (154), Pastor Polk asks himself, but he answers his own question by literally giving the clothes off his back and opening his doors to those in need. Later, we see bulldozers moving into Brooklyn and beginning to take down one house at a time over a period of weeks. Loraylee’s house isn’t even fully destroyed by the end of the novel. The workers begin to cut down the magnolia tree in her yard but stop halfway through due to malfunctioning equipment and plan to return the following week. In this moment, Loraylee reflects on how her live-in relatives Uncle Ray and Bibi would have reacted to the sight of such destruction, thinking, “If the house would of broken Bibi’s heart, the tree would break his” (268). As with In West Mills, Tomorrow’s Bread encourages the reader not only to see the value of the parts but also the value of the sum. Yes, there is humanity within each of these characters that deserves our empathy and attention, but there is also an essence of humanity that arises only within the space of a community, of a family. n

CHRISTIE COLLINS is a student in the PhD program for Creative and Critical Writing at Cardiff University in Wales. She has taught in the English Departments at Louisiana State University and Mississippi State University. Her writing has been published in Entropy, Still, Cold Mountain Review, and Chicago Review of Books, among others, and she has published a chapbook, Along the Diminishing Stretch of Memory (Dancing Girl Press, 2014. BECKY GOULD GIBSON holds a PhD in English from UNC Chapel Hill and taught literature and writing at Guilford College in Greensboro, NC, until her retirement in 2008. Her books include Heading Home (Main Street Rag, 2014; reviewed in NCLR Online 2015), winner of the 2013 Lena Shull Book Contest, and Aphrodite’s Daughter  (Texas Review Press, 2007; reviewed in NCLR 2008), winner of the X.J. Kennedy Prize. She lives in WinstonSalem, NC.

Two recent collections of poems, by North Carolina poets Susan Schmidt and Becky Gould Gibson, ask readers to sit still for a moment of exploration, to look closer, to listen in for the untold story. Though quite different in their subject matters (one environmentally driven, one historical), a common thread between them seems to be a reclaiming of what’s been lost or what’s diminishing. Susan Schmidt’s Let Go or Hold Fast and Becky Gould Gibson’s Indelible are poetry collections to be read slowly. They call for annotations; they call for a reader who will look up heron species and biblical cities out of sheer curiosity, who will marvel at the splendor of these meticulously detailed poems. In Let Go or Hold Fast, Susan Schmidt transports readers to the coastal town of Beaufort, located in the Inner Banks region of North Carolina. Winner of the 2018 Gail O’Day Poetry Award, this collection alludes to the environmental nature of its poems long before the reader turns to the first page of verse. Beyond the cover photo of the vibrant little blue herons, the book begins and ends with a three-page illustration of a heron perched on a rock, which takes flight by the third illustration. Although a minor detail, these illustrations work to glide the reader into and out of coastal Beaufort as the book begins and ends. The poet also dedicates the book to “Science, Endangered Species Migratory Bird Treaty Act, Clean Water, Clean Air, Wilderness Neighbors,” and has carefully chosen three environmentally conscious