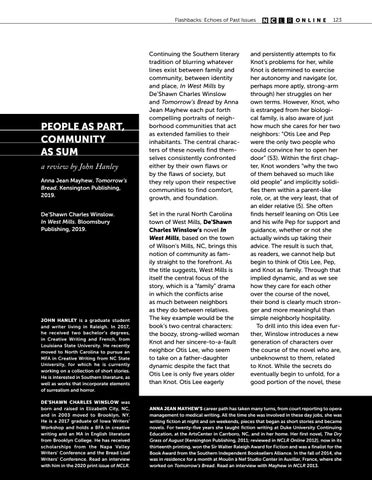 JOHN HANLEY is a graduate student and writer living in Raleigh. In 2017, he received two bachelor’s degrees, in Creative Writing and French, from Louisiana State University. He recently moved to North Carolina to pursue an MFA in Creative Writing from NC State University, for which he is currently working on a collection of short stories. He is interested in Southern literature, as well as works that incorporate elements of surrealism and horror. DE’SHAWN CHARLES WINSLOW was born and raised in Elizabeth City, NC, and in 2003 moved to Brooklyn, NY. He is a 2017 graduate of Iowa Writers’ Workshop and holds a BFA in creative writing and an MA in English literature from Brooklyn College. He has received scholarships from the Napa Valley Writers’ Conference and the Bread Loaf Writers’ Conference. Read an interview with him in the 2020 print issue of NCLR.

Continuing the Southern literary tradition of blurring whatever lines exist between family and community, between identity and place, In West Mills by De’Shawn Charles Winslow and Tomorrow’s Bread by Anna Jean Mayhew each put forth compelling portraits of neighborhood communities that act as extended families to their inhabitants. The central characters of these novels find themselves consistently confronted either by their own flaws or by the flaws of society, but they rely upon their respective communities to find comfort, growth, and foundation. Set in the rural North Carolina town of West Mills, De’Shawn Charles Winslow’s novel In West Mills, based on the town of Wilson’s Mills, NC, brings this notion of community as family straight to the forefront. As the title suggests, West Mills is itself the central focus of the story, which is a “family” drama in which the conflicts arise as much between neighbors as they do between relatives. The key example would be the book’s two central characters: the boozy, strong-willed woman Knot and her sincere-to-a-fault neighbor Otis Lee, who seem to take on a father-daughter dynamic despite the fact that Otis Lee is only five years older than Knot. Otis Lee eagerly

and persistently attempts to fix Knot’s problems for her, while Knot is determined to exercise her autonomy and navigate (or, perhaps more aptly, strong-arm through) her struggles on her own terms. However, Knot, who is estranged from her biological family, is also aware of just how much she cares for her two neighbors: “Otis Lee and Pep were the only two people who could convince her to open her door” (53). Within the first chapter, Knot wonders “why the two of them behaved so much like old people” and implicitly solidifies them within a parent-like role, or, at the very least, that of an elder relative (5). She often finds herself leaning on Otis Lee and his wife Pep for support and guidance, whether or not she actually winds up taking their advice. The result is such that, as readers, we cannot help but begin to think of Otis Lee, Pep, and Knot as family. Through that implied dynamic, and as we see how they care for each other over the course of the novel, their bond is clearly much stronger and more meaningful than simple neighborly hospitality. To drill into this idea even further, Winslow introduces a new generation of characters over the course of the novel who are, unbeknownst to them, related to Knot. While the secrets do eventually begin to unfold, for a good portion of the novel, these

ANNA JEAN MAYHEW’S career path has taken many turns, from court reporting to opera management to medical writing. All the time she was involved in these day jobs, she was writing fiction at night and on weekends, pieces that began as short stories and became novels. For twenty-five years she taught fiction writing at Duke University Continuing Education, at the ArtsCenter in Carrboro, NC, and in her home. Her first novel, The Dry Grass of August (Kensington Publishing, 2011; reviewed in NCLR Online 2012), now in its thirteenth printing, won the Sir Walter Raleigh Award for Fiction and was a finalist for the Book Award from the Southern Independent Booksellers Alliance. In the fall of 2014, she was in residence for a month at Moulin à Nef Studio Center in Auvillar, France, where she worked on Tomorrow’s Bread. Read an interview with Mayhew in NCLR 2013.