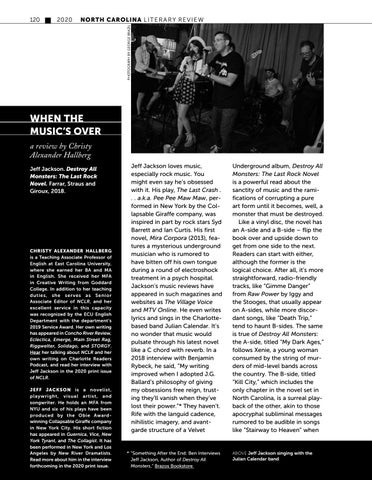 WHEN THE MUSIC’S OVER a review by Christy Alexander Hallberg Jeff Jackson. Destroy All Monsters: The Last Rock Novel. Farrar, Straus and Giroux, 2018.

CHRISTY ALEXANDER HALLBERG is a Teaching Associate Professor of English at East Carolina University, where she earned her BA and MA in English. She received her MFA in Creative Writing from Goddard College. In addition to her teaching duties, she ser ves as Senior Associate Editor of NCLR, and her excellent service in this capacity was recognized by the ECU English Department with the department’s 2019 Service Award. Her own writing has appeared in Concho River Review, Eclectica, Emerge, Main Street Rag, Riggwelter, Solidago, and STORGY. Hear her talking about NCLR and her own writing on Charlotte Readers Podcast, and read her interview with Jeff Jackson in the 2020 print issue of NCLR. JEFF JACKSON is a novelist, playwright, visual artist, and songwriter. He holds an MFA from NYU and six of his plays have been produced by the Obie Awardwinning Collapsable Giraffe company in New York City. His short fiction has appeared in Guernica, Vice, New York Tyrant, and The Collagist. It has been performed in New York and Los Angeles by New River Dramatists. Read more about him in the interview forthcoming in the 2020 print issue.

Jeff Jackson loves music, especially rock music. You might even say he’s obsessed with it. His play, The Last Crash . . . a.k.a. Pee Pee Maw Maw, performed in New York by the Collapsable Giraffe company, was inspired in part by rock stars Syd Barrett and Ian Curtis. His first novel, Mira Corpora (2013), features a mysterious underground musician who is rumored to have bitten off his own tongue during a round of electroshock treatment in a psych hospital. Jackson’s music reviews have appeared in such magazines and websites as The Village Voice and MTV Online. He even writes lyrics and sings in the Charlottebased band Julian Calendar. It’s no wonder that music would pulsate through his latest novel like a C chord with reverb. In a 2018 interview with Benjamin Rybeck, he said, “My writing improved when I adopted J.G. Ballard’s philosophy of giving my obsessions free reign, trusting they’ll vanish when they’ve lost their power.”* They haven’t. Rife with the languid cadence, nihilistic imagery, and avantgarde structure of a Velvet

* “Something After the End: Ben Interviews Jeff Jackson, Author of Destroy All Monsters,” Brazos Bookstore

Underground album, Destroy All Monsters: The Last Rock Novel is a powerful read about the sanctity of music and the ramifications of corrupting a pure art form until it becomes, well, a monster that must be destroyed. Like a vinyl disc, the novel has an A-side and a B-side – flip the book over and upside down to get from one side to the next. Readers can start with either, although the former is the logical choice. After all, it’s more straightforward, radio-friendly tracks, like “Gimme Danger” from Raw Power by Iggy and the Stooges, that usually appear on A-sides, while more discordant songs, like “Death Trip,” tend to haunt B-sides. The same is true of Destroy All Monsters: the A-side, titled “My Dark Ages,” follows Xenie, a young woman consumed by the string of murders of mid-level bands across the country. The B-side, titled “Kill City,” which includes the only chapter in the novel set in North Carolina, is a surreal playback of the other, akin to those apocryphal subliminal messages rumored to be audible in songs like “Stairway to Heaven” when

ABOVE Jeff Jackson singing with the Julian Calendar band