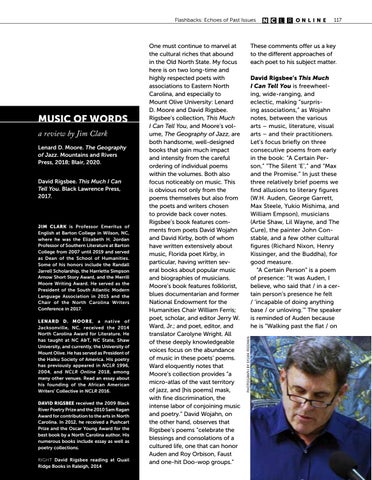 a review by Jim Clark Lenard D. Moore. The Geography of Jazz. Mountains and Rivers Press, 2018; Blair, 2020. David Rigsbee. This Much I Can Tell You. Black Lawrence Press, 2017.

JIM CLARK is Professor Emeritus of English at Barton College in Wilson, NC, where he was the Elizabeth H. Jordan Professor of Southern Literature at Barton College from 2007 until 2019 and served as Dean of the School of Humanities. Some of his honors include the Randall Jarrell Scholarship, the Harriette Simpson Arnow Short Story Award, and the Merrill Moore Writing Award. He served as the President of the South Atlantic Modern Language Association in 2015 and the Chair of the North Carolina Writers Conference in 2017. LENARD D. MOORE, a native of Jacksonville, NC, received the 2014 North Carolina Award for Literature. He has taught at NC A&T, NC State, Shaw University, and currently, the University of Mount Olive. He has served as President of the Haiku Society of America. His poetry has previously appeared in NCLR 1996, 2004, and NCLR Online 2018, among many other venues. Read an essay about his founding of the African American Writers’ Collective in NCLR 2016. DAVID RIGSBEE received the 2009 Black River Poetry Prize and the 2010 Sam Ragan Award for contribution to the arts in North Carolina. In 2012, he received a Pushcart Prize and the Oscar Young Award for the best book by a North Carolina author. His numerous books include essay as well as poetry collections. RIGHT David Rigsbee reading at Quail Ridge Books in Raleigh, 2014

These comments offer us a key to the different approaches of each poet to his subject matter. David Rigsbee’s This Much I Can Tell You is freewheeling, wide-ranging, and eclectic, making “surprising associations,” as Wojahn notes, between the various arts – music, literature, visual arts – and their practitioners. Let’s focus briefly on three consecutive poems from early in the book: “A Certain Person,” “The Silent ‘E’,” and “Max and the Promise.” In just these three relatively brief poems we find allusions to literary figures (W.H. Auden, George Garrett, Max Steele, Yukio Mishima, and William Empson), musicians (Artie Shaw, Lil Wayne, and The Cure), the painter John Constable, and a few other cultural figures (Richard Nixon, Henry Kissinger, and the Buddha), for good measure. “A Certain Person” is a poem of presence: “It was Auden, I believe, who said that / in a certain person’s presence he felt / ‘incapable of doing anything base / or unloving.’” The speaker is reminded of Auden because he is “Walking past the flat / on PHOTOGRAPH BY SYLVIA FREEMAN

One must continue to marvel at the cultural riches that abound in the Old North State. My focus here is on two long-time and highly respected poets with associations to Eastern North Carolina, and especially to Mount Olive University: Lenard D. Moore and David Rigsbee. Rigsbee’s collection, This Much I Can Tell You, and Moore’s volume, The Geography of Jazz, are both handsome, well-designed books that gain much impact and intensity from the careful ordering of individual poems within the volumes. Both also focus noticeably on music. This is obvious not only from the poems themselves but also from the poets and writers chosen to provide back cover notes. Rigsbee’s book features comments from poets David Wojahn and David Kirby, both of whom have written extensively about music, Florida poet Kirby, in particular, having written several books about popular music and biographies of musicians. Moore’s book features folklorist, blues documentarian and former National Endowment for the Humanities Chair William Ferris; poet, scholar, and editor Jerry W. Ward, Jr.; and poet, editor, and translator Carolyne Wright. All of these deeply knowledgeable voices focus on the abundance of music in these poets’ poems. Ward eloquently notes that Moore’s collection provides “a micro-atlas of the vast territory of jazz, and [his poems] mask, with fine discrimination, the intense labor of conjoining music and poetry.” David Wojahn, on the other hand, observes that Rigsbee’s poems “celebrate the blessings and consolations of a cultured life, one that can honor Auden and Roy Orbison, Faust and one-hit Doo-wop groups.”