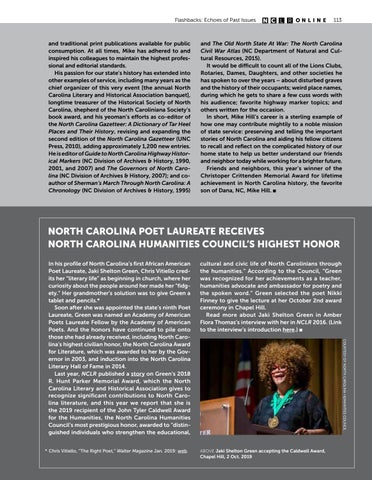 and The Old North State At War: The North Carolina Civil War Atlas (NC Department of Natural and Cultural Resources, 2015). It would be difficult to count all of the Lions Clubs, Rotaries, Dames, Daughters, and other societies he has spoken to over the years – about disturbed graves and the history of their occupants; weird place names, during which he gets to share a few cuss words with his audience; favorite highway marker topics; and others written for the occasion. In short, Mike Hill’s career is a sterling example of how one may contribute mightily to a noble mission of state service: preserving and telling the important stories of North Carolina and aiding his fellow citizens to recall and reflect on the complicated history of our home state to help us better understand our friends and neighbor today while working for a brighter future. Friends and neighbors, this year’s winner of the Christoper Crittenden Memorial Award for lifetime achievement in North Carolina history, the favorite son of Dana, NC, Mike Hill. n

cultural and civic life of North Carolinians through the humanities.” According to the Council, “Green was recognized for her achievements as a teacher, humanities advocate and ambassador for poetry and the spoken word.” Green selected the poet Nikki Finney to give the lecture at her October 2nd award ceremony in Chapel Hill. Read more about Jaki Shelton Green in Amber Flora Thomas’s interview with her in NCLR 2016. (Link to the interview’s introduction here.) n COURTESY OF NORTH CAROLINA HUMANITIES COUNCIL

In his profile of North Carolina’s first African American Poet Laureate, Jaki Shelton Green, Chris Vitiello credits her “literary life” as beginning in church, where her curiosity about the people around her made her “fidgety.” Her grandmother’s solution was to give Green a tablet and pencils.* Soon after she was appointed the state’s ninth Poet Laureate, Green was named an Academy of American Poets Laureate Fellow by the Academy of American Poets. And the honors have continued to pile onto those she had already received, including North Carolina’s highest civilian honor, the North Carolina Award for Literature, which was awarded to her by the Governor in 2003, and induction into the North Carolina Literary Hall of Fame in 2014. Last year, NCLR published a story on Green’s 2018 R. Hunt Parker Memorial Award, which the North Carolina Literary and Historical Association gives to recognize significant contributions to North Carolina literature, and this year we report that she is the 2019 recipient of the John Tyler Caldwell Award for the Humanities, the North Carolina Humanities Council’s most prestigious honor, awarded to “distinguished individuals who strengthen the educational,