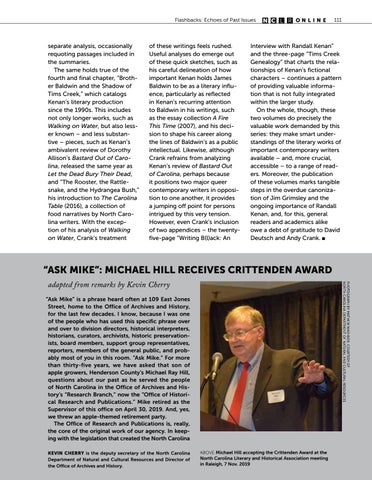 separate analysis, occasionally requoting passages included in the summaries. The same holds true of the fourth and final chapter, “Brother Baldwin and the Shadow of Tims Creek,” which catalogs Kenan’s literary production since the 1990s. This includes not only longer works, such as Walking on Water, but also lesser known – and less substantive – pieces, such as Kenan’s ambivalent review of Dorothy Allison’s Bastard Out of Carolina, released the same year as Let the Dead Bury Their Dead, and “The Rooster, the Rattlesnake, and the Hydrangea Bush,” his introduction to The Carolina Table (2016), a collection of food narratives by North Carolina writers. With the exception of his analysis of Walking on Water, Crank’s treatment

of these writings feels rushed. Useful analyses do emerge out of these quick sketches, such as his careful delineation of how important Kenan holds James Baldwin to be as a literary influence, particularly as reflected in Kenan’s recurring attention to Baldwin in his writings, such as the essay collection A Fire This Time (2007), and his decision to shape his career along the lines of Baldwin’s as a public intellectual. Likewise, although Crank refrains from analyzing Kenan’s review of Bastard Out of Carolina, perhaps because it positions two major queer contemporary writers in opposition to one another, it provides a jumping off point for persons intrigued by this very tension. However, even Crank’s inclusion of two appendices – the twentyfive-page “Writing B(l)ack: An

Interview with Randall Kenan” and the three-page “Tims Creek Genealogy” that charts the relationships of Kenan’s fictional characters – continues a pattern of providing valuable information that is not fully integrated within the larger study. On the whole, though, these two volumes do precisely the valuable work demanded by this series: they make smart understandings of the literary works of important contemporary writers available – and, more crucial, accessible – to a range of readers. Moreover, the publication of these volumes marks tangible steps in the overdue canonization of Jim Grimsley and the ongoing importance of Randall Kenan, and, for this, general readers and academics alike owe a debt of gratitude to David Deutsch and Andy Crank. n

adapted from remarks by Kevin Cherry “Ask Mike” is a phrase heard often at 109 East Jones Street, home to the Office of Archives and History, for the last few decades. I know, because I was one of the people who has used this specific phrase over and over to division directors, historical interpreters, historians, curators, archivists, historic preservationists, board members, support group representatives, reporters, members of the general public, and probably most of you in this room. “Ask Mike.” For more than thirty-five years, we have asked that son of apple growers, Henderson County’s Michael Ray Hill, questions about our past as he served the people of North Carolina in the Office of Archives and History’s “Research Branch,” now the “Office of Historical Research and Publications.” Mike retired as the Supervisor of this office on April 30, 2019. And, yes, we threw an apple-themed retirement party. The Office of Research and Publications is, really, the core of the original work of our agency. In keeping with the legislation that created the North Carolina KEVIN CHERRY is the deputy secretary of the North Carolina Department of Natural and Cultural Resources and Director of the Office of Archives and History.

ABOVE Michael Hill accepting the Crittenden Award at the North Carolina Literary and Historical Association meeting in Raleigh, 7 Nov. 2019