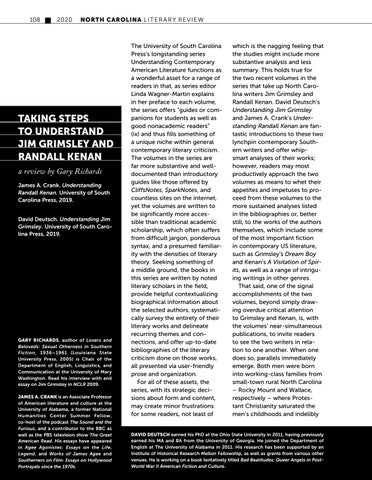 GARY RICHARDS, author of Lovers and Beloveds: Sexual Otherness in Southern Fiction, 1936–1961 (Louisiana State University Press, 2005) is Chair of the Department of English, Linguistics, and Communication at the University of Mary Washington. Read his interview with and essay on Jim Grimsley in NCLR 2009. JAMES A. CRANK is an Associate Professor of American literature and culture at the University of Alabama, a former National Humanities Center Summer Fellow, co-host of the podcast The Sound and the Furious, and a contributor to the BBC as well as the PBS television show The Great American Read. His essays have appeared in Agee Agonistes: Essays on the Life, Legend, and Works of James Agee and Southerners on Film: Essays on Hollywood Portrayals since the 1970s.

The University of South Carolina Press’s longstanding series Understanding Contemporary American Literature functions as a wonderful asset for a range of readers in that, as series editor Linda Wagner-Martin explains in her preface to each volume, the series offers “guides or companions for students as well as good nonacademic readers” (ix) and thus fills something of a unique niche within general contemporary literary criticism. The volumes in the series are far more substantive and welldocumented than introductory guides like those offered by CliffsNotes, SparkNotes, and countless sites on the internet, yet the volumes are written to be significantly more accessible than traditional academic scholarship, which often suffers from difficult jargon, ponderous syntax, and a presumed familiarity with the densities of literary theory. Seeking something of a middle ground, the books in this series are written by noted literary scholars in the field, provide helpful contextualizing biographical information about the selected authors, systematically survey the entirety of their literary works and delineate recurring themes and connections, and offer up-to-date bibliographies of the literary criticism done on those works, all presented via user-friendly prose and organization. For all of these assets, the series, with its strategic decisions about form and content, may create minor frustrations for some readers, not least of

which is the nagging feeling that the studies might include more substantive analysis and less summary. This holds true for the two recent volumes in the series that take up North Carolina writers Jim Grimsley and Randall Kenan. David Deutsch’s Understanding Jim Grimsley and James A. Crank’s Understanding Randall Kenan are fantastic introductions to these two lynchpin contemporary Southern writers and offer whipsmart analyses of their works; however, readers may most productively approach the two volumes as means to whet their appetites and impetuses to proceed from these volumes to the more sustained analyses listed in the bibliographies or, better still, to the works of the authors themselves, which include some of the most important fiction in contemporary US literature, such as Grimsley’s Dream Boy and Kenan’s A Visitation of Spirits, as well as a range of intriguing writings in other genres. That said, one of the signal accomplishments of the two volumes, beyond simply drawing overdue critical attention to Grimsley and Kenan, is, with the volumes’ near-simultaneous publications, to invite readers to see the two writers in relation to one another. When one does so, parallels immediately emerge. Both men were born into working-class families from small-town rural North Carolina – Rocky Mount and Wallace, respectively – where Protestant Christianity saturated the men’s childhoods and indelibly

DAVID DEUTSCH earned his PhD at the Ohio State University in 2011, having previously earned his MA and BA from the University of Georgia. He joined the Department of English at The University of Alabama in 2011. His research has been supported by an Institute of Historical Research Mellon Fellowship, as well as grants from various other venues. He is working on a book tentatively titled Bad Beatitudes: Queer Angels in PostWorld War II American Fiction and Culture.