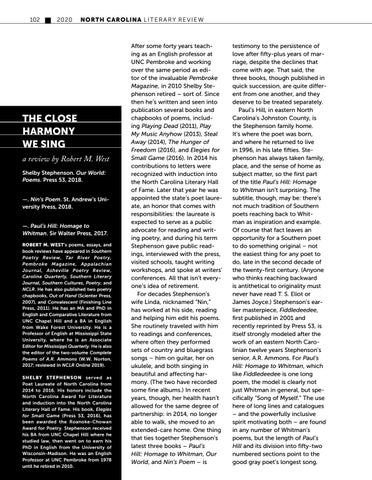 THE CLOSE HARMONY WE SING a review by Robert M. West Shelby Stephenson. Our World: Poems. Press 53, 2018. —. Nin’s Poem. St. Andrew’s University Press, 2018. —. Paul’s Hill: Homage to Whitman. Sir Walter Press, 2017. ROBERT M. WEST’s poems, essays, and book reviews have appeared in Southern Poetry Review, Tar River Poetry, Pembroke Magazine, Appalachian Journal, Asheville Poetry Review, Carolina Quarterly, Southern Literary Journal, Southern Cultures, Poetry, and NCLR. He has also published two poetry chapbooks, Out of Hand (Scienter Press, 2007), and Convalescent (Finishing Line Press, 2011). He has an MA and PhD in English and Comparative Literature from UNC Chapel Hill and a BA in English from Wake Forest University. He is a Professor of English at Mississippi State University, where he is an Associate Editor for Mississippi Quarterly. He is also the editor of the two-volume Complete Poems of A.R. Ammons (W.W. Norton, 2017; reviewed in NCLR Online 2019). SHELBY STEPHENSON served as Poet Laureate of North Carolina from 2014 to 2016. His honors include the North Carolina Award for Literature and induction into the North Carolina Literary Hall of Fame. His book, Elegies for Small Game (Press 53, 2016), has been awarded the Roanoke-Chowan Award for Poetry. Stephenson received his BA from UNC Chapel Hill where he studied law, then went on to earn his PhD in English from the University of Wisconsin-Madison. He was an English Professor at UNC Pembroke from 1978 until he retired in 2010.

After some forty years teaching as an English professor at UNC Pembroke and working over the same period as editor of the invaluable Pembroke Magazine, in 2010 Shelby Stephenson retired – sort of. Since then he’s written and seen into publication several books and chapbooks of poems, including Playing Dead (2011), Play My Music Anyhow (2013), Steal Away (2014), The Hunger of Freedom (2016), and Elegies for Small Game (2016). In 2014 his contributions to letters were recognized with induction into the North Carolina Literary Hall of Fame. Later that year he was appointed the state’s poet laureate, an honor that comes with responsibilities: the laureate is expected to serve as a public advocate for reading and writing poetry, and during his term Stephenson gave public readings, interviewed with the press, visited schools, taught writing workshops, and spoke at writers’ conferences. All that isn’t everyone’s idea of retirement. For decades Stephenson’s wife Linda, nicknamed “Nin,” has worked at his side, reading and helping him edit his poems. She routinely traveled with him to readings and conferences, where often they performed sets of country and bluegrass songs – him on guitar, her on ukulele, and both singing in beautiful and affecting harmony. (The two have recorded some fine albums.) In recent years, though, her health hasn’t allowed for the same degree of partnership: in 2014, no longer able to walk, she moved to an extended-care home. One thing that ties together Stephenson’s latest three books – Paul’s Hill: Homage to Whitman, Our World, and Nin’s Poem – is

testimony to the persistence of love after fifty-plus years of marriage, despite the declines that come with age. That said, the three books, though published in quick succession, are quite different from one another, and they deserve to be treated separately. Paul’s Hill, in eastern North Carolina’s Johnston County, is the Stephenson family home. It’s where the poet was born, and where he returned to live in 1996, in his late fifties. Stephenson has always taken family, place, and the sense of home as subject matter, so the first part of the title Paul’s Hill: Homage to Whitman isn’t surprising. The subtitle, though, may be: there’s not much tradition of Southern poets reaching back to Whitman as inspiration and example. Of course that fact leaves an opportunity for a Southern poet to do something original – not the easiest thing for any poet to do, late in the second decade of the twenty-first century. (Anyone who thinks reaching backward is antithetical to originality must never have read T. S. Eliot or James Joyce.) Stephenson’s earlier masterpiece, Fiddledeedee, first published in 2001 and recently reprinted by Press 53, is itself strongly modeled after the work of an eastern North Carolinian twelve years Stephenson’s senior, A.R. Ammons. For Paul’s Hill: Homage to Whitman, which like Fiddledeedee is one long poem, the model is clearly not just Whitman in general, but specifically “Song of Myself.” The use here of long lines and catalogues – and the powerfully inclusive spirit motivating both – are found in any number of Whitman’s poems, but the length of Paul’s Hill and its division into fifty-two numbered sections point to the good gray poet’s longest song.