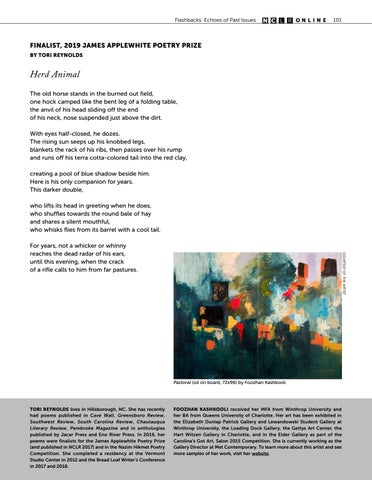 Herd Animal The old horse stands in the burned out field, one hock camped like the bent leg of a folding table, the anvil of his head sliding off the end of his neck, nose suspended just above the dirt. With eyes half-closed, he dozes. The rising sun seeps up his knobbed legs, blankets the rack of his ribs, then passes over his rump and runs off his terra cotta-colored tail into the red clay, creating a pool of blue shadow beside him. Here is his only companion for years. This darker double, who lifts its head in greeting when he does, who shuffles towards the round bale of hay and shares a silent mouthful, who whisks flies from its barrel with a cool tail.

For years, not a whicker or whinny reaches the dead radar of his ears, until this evening, when the crack of a rifle calls to him from far pastures.

Pastoral (oil on board, 72x96) by Foozhan Kashkooli

TORI REYNOLDS lives in Hillsborough, NC. She has recently had poems published in Cave Wall, Greensboro Review, Southwest Review, South Carolina Review, Chautauqua Literary Review, Pembroke Magazine and in anthologies published by Jacar Press and Eno River Press. In 2016, her poems were finalists for the James Applewhite Poetry Prize (and published in NCLR 2017) and in the Nazim Hikmet Poetry Competition. She completed a residency at the Vermont Studio Center in 2012 and the Bread Loaf Writerâ&#x20AC;&#x2122;s Conference in 2017 and 2018.

FOOZHAN KASHKOOLI received her MFA from Winthrop University and her BA from Queens University of Charlotte. Her art has been exhibited in the Elizabeth Dunlap Patrick Gallery and Lewandowski Student Gallery at Winthrop University, the Loading Dock Gallery, the Gettys Art Center, the Hart Witzen Gallery in Charlotte, and in the Elder Gallery as part of the Carolinaâ&#x20AC;&#x2122;s Got Art, Salon 2015 Competition. She is currently working as the Gallery Director at Met Contemporary. To learn more about this artist and see more samples of her work, visit her website.