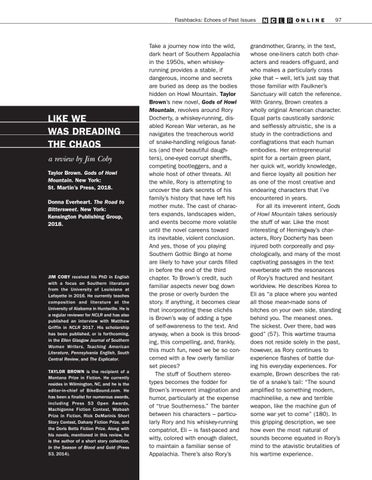 JIM COBY received his PhD in English with a focus on Southern literature from the University of Louisiana at Lafayette in 2016. He currently teaches composition and literature at the University of Alabama in Huntsville. He is a regular reviewer for NCLR and has also published an interview with Matthew Griffin in NCLR 2017. His scholarship has been published, or is forthcoming, in the Ellen Glasgow Journal of Southern Women Writers, Teaching American Literature, Pennsylvania English, South Central Review, and The Explicator. TAYLOR BROWN is the recipient of a Montana Prize in Fiction. He currently resides in Wilmington, NC, and he is the editor-in-chief of BikeBound.com. He has been a finalist for numerous awards, including Press 53 Open Awards, Machigonne Fiction Contest, Wabash Prize in Fiction, Rick DeMarinis Short Story Contest, Dahany Fiction Prize, and the Doris Betts Fiction Prize. Along with his novels, mentioned in this review, he is the author of a short story collection, In the Season of Blood and Gold (Press 53, 2014).

Take a journey now into the wild, dark heart of Southern Appalachia in the 1950s, when whiskeyrunning provides a stable, if dangerous, income and secrets are buried as deep as the bodies hidden on Howl Mountain. Taylor Brown’s new novel, Gods of Howl Mountain, revolves around Rory Docherty, a whiskey-running, disabled Korean War veteran, as he navigates the treacherous world of snake-handling religious fanatics (and their beautiful daughters), one-eyed corrupt sheriffs, competing bootleggers, and a whole host of other threats. All the while, Rory is attempting to uncover the dark secrets of his family’s history that have left his mother mute. The cast of characters expands, landscapes widen, and events become more volatile until the novel careens toward its inevitable, violent conclusion. And yes, those of you playing Southern Gothic Bingo at home are likely to have your cards filled in before the end of the third chapter. To Brown’s credit, such familiar aspects never bog down the prose or overly burden the story. If anything, it becomes clear that incorporating these clichés is Brown’s way of adding a type of self-awareness to the text. And anyway, when a book is this brooding, this compelling, and, frankly, this much fun, need we be so concerned with a few overly familiar set pieces? The stuff of Southern stereotypes becomes the fodder for Brown’s irreverent imagination and humor, particularly at the expense of “true Southerness.” The banter between his characters – particularly Rory and his whiskey-running compatriot, Eli – is fast-paced and witty, colored with enough dialect, to maintain a familiar sense of Appalachia. There’s also Rory’s

grandmother, Granny, in the text, whose one-liners catch both characters and readers off-guard, and who makes a particularly crass joke that – well, let’s just say that those familiar with Faulkner’s Sanctuary will catch the reference. With Granny, Brown creates a wholly original American character. Equal parts caustically sardonic and selflessly altruistic, she is a study in the contradictions and conflagrations that each human embodies. Her entrepreneurial spirit for a certain green plant, her quick wit, worldly knowledge, and fierce loyalty all position her as one of the most creative and endearing characters that I’ve encountered in years. For all its irreverent intent, Gods of Howl Mountain takes seriously the stuff of war. Like the most interesting of Hemingway’s characters, Rory Docherty has been injured both corporeally and psychologically, and many of the most captivating passages in the text reverberate with the resonances of Rory’s fractured and hesitant worldview. He describes Korea to Eli as “a place where you wanted all those mean-made sons of bitches on your own side, standing behind you. The meanest ones. The sickest. Over there, bad was good” (57). This wartime trauma does not reside solely in the past, however, as Rory continues to experience flashes of battle during his everyday experiences. For example, Brown describes the rattle of a snake’s tail: “The sound amplified to something modern, machinelike, a new and terrible weapon, like the machine gun of some war yet to come” (180). In this gripping description, we see how even the most natural of sounds become equated in Rory’s mind to the atavistic brutalities of his wartime experience.