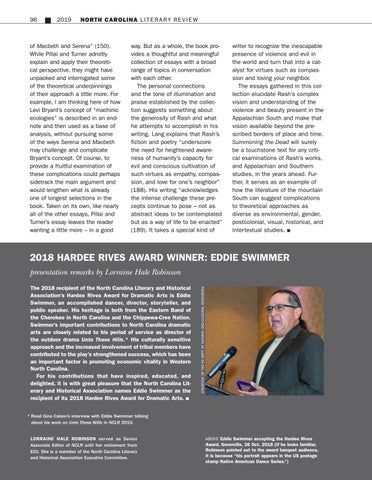 of Macbeth and Serena” (150). While Pillai and Turner adroitly explain and apply their theoretical perspective, they might have unpacked and interrogated some of the theoretical underpinnings of their approach a little more. For example, I am thinking here of how Levi Bryant’s concept of “machinic ecologies” is described in an endnote and then used as a base of analysis, without pursuing some of the ways Serena and Macbeth may challenge and complicate Bryant’s concept. Of course, to provide a fruitful examination of these complications could perhaps sidetrack the main argument and would lengthen what is already one of longest selections in the book. Taken on its own, like nearly all of the other essays, Pillai and Turner’s essay leaves the reader wanting a little more – in a good

way. But as a whole, the book provides a thoughtful and meaningful collection of essays with a broad range of topics in conversation with each other. The personal connections and the tone of illumination and praise established by the collection suggests something about the generosity of Rash and what he attempts to accomplish in his writing. Lang explains that Rash’s fiction and poetry “underscore the need for heightened awareness of humanity’s capacity for evil and conscious cultivation of such virtues as empathy, compassion, and love for one’s neighbor” (188). His writing “acknowledges the intense challenge these precepts continue to pose – not as abstract ideas to be contemplated but as a way of life to be enacted” (189). It takes a special kind of

writer to recognize the inescapable presence of violence and evil in the world and turn that into a catalyst for virtues such as compassion and loving your neighbor. The essays gathered in this collection elucidate Rash’s complex vision and understanding of the violence and beauty present in the Appalachian South and make that vision available beyond the prescribed borders of place and time. Summoning the Dead will surely be a touchstone text for any critical examinations of Rash’s works, and Appalachian and Southern studies, in the years ahead. Further, it serves as an example of how the literature of the mountain South can suggest complications to theoretical approaches as diverse as environmental, gender, postcolonial, visual, historical, and intertextual studies. n

2018 HARDEE RIVES AWARD WINNER: EDDIE SWIMMER The 2018 recipient of the North Carolina Literary and Historical Association’s Hardee Rives Award for Dramatic Arts is Eddie Swimmer, an accomplished dancer, director, storyteller, and public speaker. His heritage is both from the Eastern Band of the Cherokee in North Carolina and the Chippewa-Cree Nation. Swimmer’s important contributions to North Carolina dramatic arts are closely related to his period of service as director of the outdoor drama Unto These Hills.* His culturally sensitive approach and the increased involvement of tribal members have contributed to the play’s strengthened success, which has been an important factor in promoting economic vitality in Western North Carolina. For his contributions that have inspired, educated, and delighted, it is with great pleasure that the North Carolina Literary and Historical Association names Eddie Swimmer as the recipient of its 2018 Hardee Rives Award for Dramatic Arts. n

COURTESY OF THE NC DEPT. OF NATURAL AND CULTURAL RESOURCES

* Read Gina Caison’s interview with Eddie Swimmer talking about his work on Unto These Wills in NCLR 2010. LORRAINE HALE ROBINSON served as Senior Associate Editor of NCLR until her retirement from ECU. She is a member of the North Carolina Literary and Historical Association Executive Committee.

Award, Greenville, 26 Oct. 2018 (If he looks familiar, Robinson pointed out to the award banquet audience, it is because “his portrait appears in the US postage stamp Native American Dance Series.”)