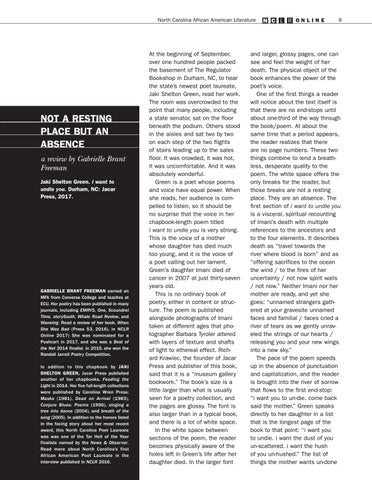 NOT A RESTING PLACE BUT AN ABSENCE a review by Gabrielle Brant Freeman Jaki Shelton Green. i want to undie you. Durham, NC: Jacar Press, 2017.

GABRIELLE BRANT FREEMAN earned an MFA from Converse College and teaches at ECU. Her poetry has been published in many journals, including EMRYS, One, Scoundrel Time, storySouth, Whale Road Review, and Waxwing. Read a review of her book, When She Was Bad (Press 53, 2016), in NCLR Online 2017) She was nominated for a Pushcart in 2017, and she was a Best of the Net 2014 finalist. In 2015, she won the Randall Jarrell Poetry Competition. In additon to this chapbook by JAKI SHELTON GREEN, Jacar Press published another of her chapbooks, Feeding the Light in 2014. Her five full-length collections were published by Carolina Wren Press: Masks (1981), Dead on Arrival (1983), Conjure Blues: Poems (1996), singing a tree into dance (2004), and breath of the song (2005). In addition to the honors listed in the facing story about her most recent award, this North Carolina Poet Laureate was was one of the Tar Hell of the Year finalists named by the News & Observer. Read more about North Carolina’s first African American Poet Laureate in the interview published in NCLR 2016.

At the beginning of September, over one hundred people packed the basement of The Regulator Bookshop in Durham, NC, to hear the state’s newest poet laureate, Jaki Shelton Green, read her work. The room was overcrowded to the point that many people, including a state senator, sat on the floor beneath the podium. Others stood in the aisles and sat two by two on each step of the two flights of stairs leading up to the sales floor. It was crowded, it was hot, it was uncomfortable. And it was absolutely wonderful. Green is a poet whose poems and voice have equal power. When she reads, her audience is compelled to listen, so it should be no surprise that the voice in her chapbook-length poem titled i want to undie you is very strong. This is the voice of a mother whose daughter has died much too young, and it is the voice of a poet calling out her lament. Green’s daughter Imani died of cancer in 2007 at just thirty-seven years old. This is no ordinary book of poetry, either in content or structure. The poem is published alongside photographs of Imani taken at different ages that photographer Barbara Tyroler altered with layers of texture and shafts of light to ethereal effect. Richard Krawiec, the founder of Jacar Press and publisher of this book, said that it is a “museum gallery bookwork.” The book’s size is a little larger than what is usually seen for a poetry collection, and the pages are glossy. The font is also larger than in a typical book, and there is a lot of white space. In the white space between sections of the poem, the reader becomes physically aware of the holes left in Green’s life after her daughter died. In the larger font

and larger, glossy pages, one can see and feel the weight of her death. The physical object of the book enhances the power of the poet’s voice. One of the first things a reader will notice about the text itself is that there are no end-stops until about one-third of the way through the book/poem. At about the same time that a period appears, the reader realizes that there are no page numbers. These two things combine to lend a breathless, desperate quality to the poem. The white space offers the only breaks for the reader, but those breaks are not a resting place. They are an absence. The first section of i want to undie you is a visceral, spiritual recounting of Imani’s death with multiple references to the ancestors and to the four elements. It describes death as “travel towards the river where blood is born” and as “offering sacrifices to the ocean the wind / to the fires of her uncertainty / not now spirit wails / not now.” Neither Imani nor her mother are ready, and yet she goes: “unnamed strangers gathered at your gravesite unnamed faces and familial / faces cried a river of tears as we gently unraveled the strings of our hearts / releasing you and your new wings into a new sky.” The pace of the poem speeds up in the absence of punctuation and capitalization, and the reader is brought into the river of sorrow that flows to the first end-stop: “i want you to un-die. come back said the mother.” Green speaks directly to her daughter in a list that is the longest page of the book to that point: “i want you to undie. i want the dust of you un-scattered. i want the hush of you un-hushed.” The list of things the mother wants un-done