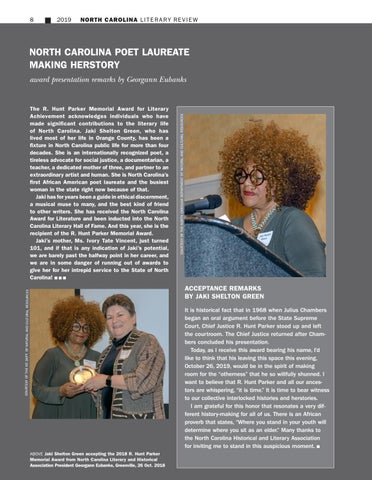 The R. Hunt Parker Memorial Award for Literary Achievement acknowledges individuals who have made significant contributions to the literary life of North Carolina. Jaki Shelton Green, who has lived most of her life in Orange County, has been a fixture in North Carolina public life for more than four decades. She is an internationally recognized poet, a tireless advocate for social justice, a documentarian, a teacher, a dedicated mother of three, and partner to an extraordinary artist and human. She is North Carolina’s first African American poet laureate and the busiest woman in the state right now because of that. Jaki has for years been a guide in ethical discernment, a musical muse to many, and the best kind of friend to other writers. She has received the North Carolina Award for Literature and been inducted into the North Carolina Literary Hall of Fame. And this year, she is the recipient of the R. Hunt Parker Memorial Award. Jaki’s mother, Ms. Ivory Tate Vincent, just turned 101, and if that is any indication of Jaki’s potential, we are barely past the halfway point in her career, and we are in some danger of running out of awards to give her for her intrepid service to the State of North Carolina! n n n

COURTESY OF THE NORTH CAROLINA DEPARTMENT OF NATURAL AND CULTURAL RESOURCES

COURTESY OF THE NC DEPT. OF NATURAL AND CULTURAL RESOURCES

ACCEPTANCE REMARKS BY JAKI SHELTON GREEN It is historical fact that in 1968 when Julius Chambers began an oral argument before the State Supreme Court, Chief Justice R. Hunt Parker stood up and left the courtroom. The Chief Justice returned after Chambers concluded his presentation. Today, as I receive this award bearing his name, I’d like to think that his leaving this space this evening, October 26, 2019, would be in the spirit of making room for the “otherness” that he so willfully shunned. I want to believe that R. Hunt Parker and all our ancestors are whispering, “it is time.” It is time to bear witness to our collective interlocked histories and herstories. I am grateful for this honor that resonates a very different history-making for all of us. There is an African proverb that states, “Where you stand in your youth will determine where you sit as an elder.” Many thanks to the North Carolina Historical and Literary Association for inviting me to stand in this auspicious moment. n ABOVE Jaki Shelton Green accepting the 2018 R. Hunt Parker