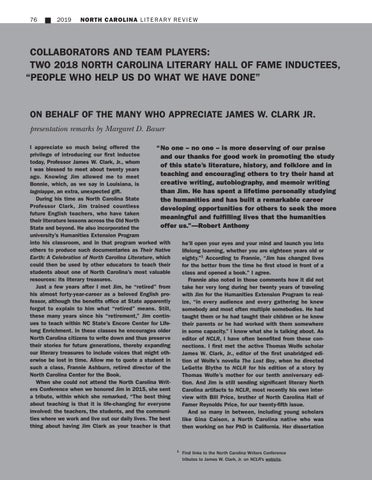 COLLABORATORS AND TEAM PLAYERS: TWO 2018 NORTH CAROLINA LITERARY HALL OF FAME INDUCTEES, “PEOPLE WHO HELP US DO WHAT WE HAVE DONE”

ON BEHALF OF THE MANY WHO APPRECIATE JAMES W. CLARK JR. presentation remarks by Margaret D. Bauer I appreciate so much being offered the “ No one – no one – is more deserving of our praise privilege of introducing our first inductee and our thanks for good work in promoting the study today, Professor James W. Clark, Jr., whom of this state’s literature, history, and folklore and in I was blessed to meet about twenty years teaching and encouraging others to try their hand at ago. Knowing Jim allowed me to meet creative writing, autobiography, and memoir writing Bonnie, which, as we say in Louisiana, is lagniappe, an extra, unexpected gift. than Jim. He has spent a lifetime personally studying During his time as North Carolina State the humanities and has built a remarkable career Professor Clark, Jim trained countless developing opportunities for others to seek the more future English teachers, who have taken meaningful and fulfilling lives that the humanities their literature lessons across the Old North offer us.”—Robert Anthony State and beyond. He also incorporated the university’s Humanities Extension Program into his classroom, and in that program worked with he’ll open your eyes and your mind and launch you into others to produce such documentaries as Their Native lifelong learning, whether you are eighteen years old or Earth: A Celebration of North Carolina Literature, which eighty.”1 According to Frannie, “Jim has changed lives could then be used by other educators to teach their for the better from the time he first stood in front of a students about one of North Carolina’s most valuable class and opened a book.” I agree. resources: its literary treasures. Frannie also noted in those comments how it did not Just a few years after I met Jim, he “retired” from take her very long during her twenty years of traveling his almost forty-year-career as a beloved English prowith Jim for the Humanities Extension Program to realfessor, although the benefits office at State apparently ize, “in every audience and every gathering he knew forgot to explain to him what “retired” means. Still, somebody and most often multiple somebodies. He had these many years since his “retirement,” Jim contintaught them or he had taught their children or he knew ues to teach within NC State’s Encore Center for Lifetheir parents or he had worked with them somewhere long Enrichment. In these classes he encourages older in some capacity.” I know what she is talking about. As North Carolina citizens to write down and thus preserve editor of NCLR, I have often benefited from these contheir stories for future generations, thereby expanding nections. I first met the active Thomas Wolfe scholar our literary treasures to include voices that might othJames W. Clark, Jr., editor of the first unabridged edierwise be lost in time. Allow me to quote a student in tion of Wolfe’s novella The Lost Boy, when he directed such a class, Frannie Ashburn, retired director of the LeGette Blythe to NCLR for his edition of a story by North Carolina Center for the Book. Thomas Wolfe’s mother for our tenth anniversary ediWhen she could not attend the North Carolina Writtion. And Jim is still sending significant literary North ers Conference when we honored Jim in 2015, she sent Carolina artifacts to NCLR, most recently his own intera tribute, within which she remarked, “The best thing view with Bill Price, brother of North Carolina Hall of about teaching is that it is life-changing for everyone Famer Reynolds Price, for our twenty-fifth issue. involved: the teachers, the students, and the communiAnd so many in between, including young scholars ties where we work and live out our daily lives. The best like Gina Caison, a North Carolina native who was thing about having Jim Clark as your teacher is that then working on her PhD in California. Her dissertation