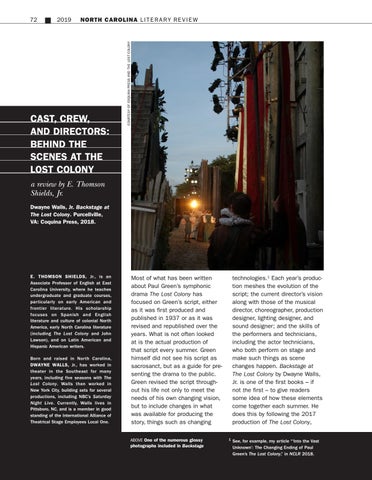 CAST, CREW, AND DIRECTORS: BEHIND THE SCENES AT THE LOST COLONY

COURTESY OF COQUINA PRESS AND THE LOST COLONY

E. THOMSON SHIELDS, Jr., is an Associate Professor of English at East Carolina University, where he teaches undergraduate and graduate courses, particularly on early American and frontier literature. His scholarship focuses on Spanish and English literature and culture of colonial North America, early North Carolina literature (including The Lost Colony and John Lawson), and on Latin American and Hispanic American writers. Born and raised in North Carolina, DWAYNE WALLS, Jr., has worked in theater in the Southeast for many years, including five seasons with The Lost Colony. Walls then worked in New York City, building sets for several productions, including NBC’s Saturday Night Live. Currently, Walls lives in Pittsboro, NC, and is a member in good standing of the International Alliance of Theatrical Stage Employees Local One.

Most of what has been written about Paul Green’s symphonic drama The Lost Colony has focused on Green’s script, either as it was first produced and published in 1937 or as it was revised and republished over the years. What is not often looked at is the actual production of that script every summer. Green himself did not see his script as sacrosanct, but as a guide for presenting the drama to the public. Green revised the script throughout his life not only to meet the needs of his own changing vision, but to include changes in what was available for producing the story, things such as changing ABOVE One of the numerous glossy

technologies.1 Each year’s production meshes the evolution of the script; the current director’s vision along with those of the musical director, choreographer, production designer, lighting designer, and sound designer; and the skills of the performers and technicians, including the actor technicians, who both perform on stage and make such things as scene changes happen. Backstage at The Lost Colony by Dwayne Walls, Jr. is one of the first books – if not the first – to give readers some idea of how these elements come together each summer. He does this by following the 2017 production of The Lost Colony, 1

See, for example, my article “‘Into the Vast Unknown’: The Changing Ending of Paul Green’s The Lost Colony,” in NCLR 2018.