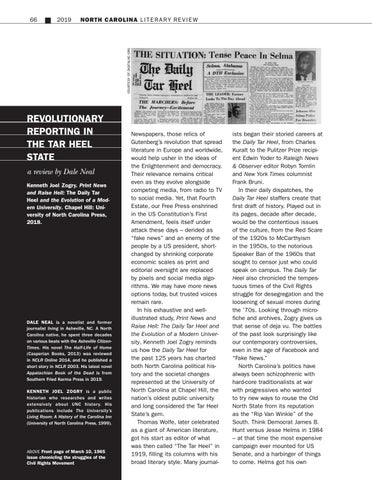 DALE NEAL is a novelist and former journalist living in Asheville, NC. A North Carolina native, he spent three decades on various beats with the Asheville CitizenTimes. His novel The Half-Life of Home (Casperian Books, 2013) was reviewed in NCLR Online 2014, and he published a short story in NCLR 2003. His latest novel Appalachian Book of the Dead is from Southern Fried Karma Press in 2019. KENNETH JOEL ZOGRY is a public historian who researches and writes extensively about UNC histor y. His publications include The University’s Living Room: A History of the Carolina Inn (University of North Carolina Press, 1999).

ABOVE Front page of March 10, 1965 issue chronicling the struggles of the Civil Rights Movement

Newspapers, those relics of Gutenberg’s revolution that spread literature in Europe and worldwide, would help usher in the ideas of the Enlightenment and democracy. Their relevance remains critical even as they evolve alongside competing media, from radio to TV to social media. Yet, that Fourth Estate, our Free Press enshrined in the US Constitution’s First Amendment, feels itself under attack these days – derided as “fake news” and an enemy of the people by a US president, shortchanged by shrinking corporate economic scales as print and editorial oversight are replaced by pixels and social media algorithms. We may have more news options today, but trusted voices remain rare. In his exhaustive and wellillustrated study, Print News and Raise Hell: The Daily Tar Heel and the Evolution of a Modern University, Kenneth Joel Zogry reminds us how the Daily Tar Heel for the past 125 years has charted both North Carolina political history and the societal changes represented at the University of North Carolina at Chapel Hill, the nation’s oldest public university and long considered the Tar Heel State’s gem. Thomas Wolfe, later celebrated as a giant of American literature, got his start as editor of what was then called “The Tar Heel” in 1919, filling its columns with his broad literary style. Many journal-

ists began their storied careers at the Daily Tar Heel, from Charles Kuralt to the Pulitzer Prize recipient Edwin Yoder to Raleigh News & Observer editor Robyn Tomlin and New York Times columnist Frank Bruni. In their daily dispatches, the Daily Tar Heel staffers create that first draft of history. Played out in its pages, decade after decade, would be the contentious issues of the culture, from the Red Scare of the 1920s to McCarthyism in the 1950s, to the notorious Speaker Ban of the 1960s that sought to censor just who could speak on campus. The Daily Tar Heel also chronicled the tempestuous times of the Civil Rights struggle for desegregation and the loosening of sexual mores during the ’70s. Looking through microfiche and archives, Zogry gives us that sense of deja vu. The battles of the past look surprisingly like our contemporary controversies, even in the age of Facebook and “Fake News.” North Carolina’s politics have always been schizophrenic with hard-core traditionalists at war with progressives who wanted to try new ways to rouse the Old North State from its reputation as the “Rip Van Winkle” of the South. Think Democrat James B. Hunt versus Jesse Helms in 1984 – at that time the most expensive campaign ever mounted for US Senate, and a harbinger of things to come. Helms got his own