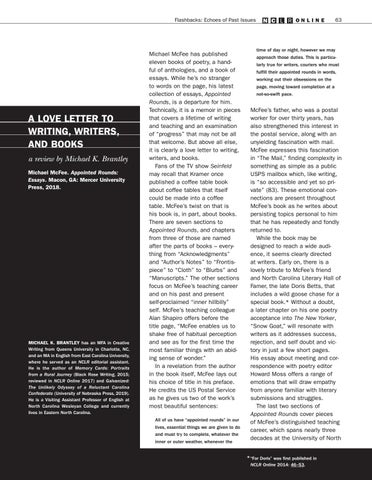 MICHAEL K. BRANTLEY has an MFA in Creative Writing from Queens University in Charlotte, NC, and an MA in English from East Carolina University, where he served as an NCLR editorial assistant. He is the author of Memory Cards: Portraits from a Rural Journey (Black Rose Writing, 2015; reviewed in NCLR Online 2017) and Galvanized: The Unlikely Odyssey of a Reluctant Carolina Confederate (University of Nebraska Press, 2019). He is a Visiting Assistant Professor of English at North Carolina Wesleyan College and currently lives in Eastern North Carolina.

Michael McFee has published eleven books of poetry, a handful of anthologies, and a book of essays. While he’s no stranger to words on the page, his latest collection of essays, Appointed Rounds, is a departure for him. Technically, it is a memoir in pieces that covers a lifetime of writing and teaching and an examination of “progress” that may not be all that welcome. But above all else, it is clearly a love letter to writing, writers, and books. Fans of the TV show Seinfeld may recall that Kramer once published a coffee table book about coffee tables that itself could be made into a coffee table. McFee’s twist on that is his book is, in part, about books. There are seven sections to Appointed Rounds, and chapters from three of those are named after the parts of books – everything from “Acknowledgments” and “Author’s Notes” to “Frontispiece” to “Cloth” to “Blurbs” and “Manuscripts.” The other sections focus on McFee’s teaching career and on his past and present self-proclaimed “inner hillbilly” self. McFee’s teaching colleague Alan Shapiro offers before the title page, “McFee enables us to shake free of habitual perception and see as for the first time the most familiar things with an abiding sense of wonder.” In a revelation from the author in the book itself, McFee lays out his choice of title in his preface. He credits the US Postal Service as he gives us two of the work’s most beautiful sentences: All of us have “appointed rounds” in our lives, essential things we are given to do and must try to complete, whatever the inner or outer weather, whenever the

time of day or night, however we may approach those duties. This is particularly true for writers, couriers who must fulfill their appointed rounds in words, working out their obsessions on the page, moving toward completion at a not-so-swift pace.

McFee’s father, who was a postal worker for over thirty years, has also strengthened this interest in the postal service, along with an unyielding fascination with mail. McFee expresses this fascination in “The Mail,” finding complexity in something as simple as a public USPS mailbox which, like writing, is “so accessible and yet so private” (83). These emotional connections are present throughout McFee’s book as he writes about persisting topics personal to him that he has repeatedly and fondly returned to. While the book may be designed to reach a wide audience, it seems clearly directed at writers. Early on, there is a lovely tribute to McFee’s friend and North Carolina Literary Hall of Famer, the late Doris Betts, that includes a wild goose chase for a special book.* Without a doubt, a later chapter on his one poetry acceptance into The New Yorker, “Snow Goat,” will resonate with writers as it addresses success, rejection, and self doubt and victory in just a few short pages. His essay about meeting and correspondence with poetry editor Howard Moss offers a range of emotions that will draw empathy from anyone familiar with literary submissions and struggles. The last two sections of Appointed Rounds cover pieces of McFee’s distinguished teaching career, which spans nearly three decades at the University of North * “For Doris” was first published in NCLR Online 2014: 46–53.