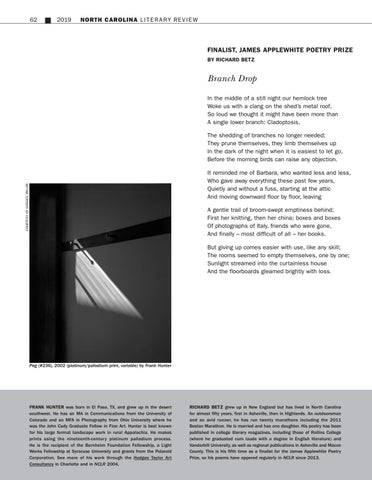 Branch Drop In the middle of a still night our hemlock tree Woke us with a clang on the shed’s metal roof, So loud we thought it might have been more than A single lower branch: Cladoptosis, The shedding of branches no longer needed; They prune themselves, they limb themselves up In the dark of the night when it is easiest to let go, Before the morning birds can raise any objection.

It reminded me of Barbara, who wanted less and less, Who gave away everything these past few years, Quietly and without a fuss, starting at the attic And moving downward floor by floor, leaving A gentle trail of broom-swept emptiness behind; First her knitting, then her china; boxes and boxes Of photographs of Italy, friends who were gone, And finally – most difficult of all – her books. But giving up comes easier with use, like any skill; The rooms seemed to empty themselves, one by one; Sunlight streamed into the curtainless house And the floorboards gleamed brightly with loss.

FRANK HUNTER was born in El Paso, TX, and grew up in the desert southwest. He has an MA in Communications from the University of Colorado and an MFA in Photography from Ohio University where he was the John Cady Graduate Fellow in Fine Art. Hunter is best known for his large format landscape work in rural Appalachia. He makes prints using the nineteenth-century platinum palladium process. He is the recipient of the Bernheim Foundation Fellowship, a Light Works Fellowship at Syracuse University and grants from the Polaroid Corporation. See more of his work through the Hodges Taylor Art Consultancy in Charlotte and in NCLR 2004.

RICHARD BETZ grew up in New England but has lived in North Carolina for almost fifty years, first in Asheville, then in Highlands. An outdoorsman and an avid runner, he has run twenty marathons including the 2011 Boston Marathon. He is married and has one daughter. His poetry has been published in college literary magazines, including those of Rollins College (where he graduated cum laude with a degree in English literature) and Vanderbilt University, as well as regional publications in Asheville and Macon County. This is his fifth time as a finalist for the James Applewhite Poetry Prize, so his poems have appered regularly in NCLR since 2013.