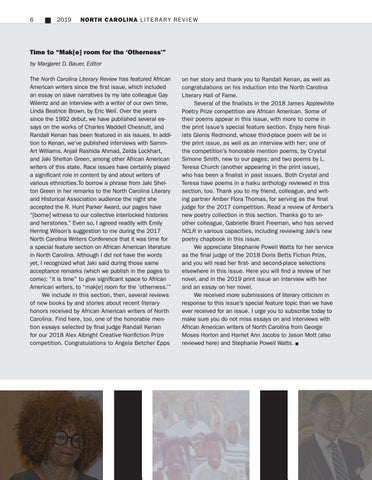 Time to “Mak[e] room for the ‘Otherness’” by Margaret D. Bauer, Editor The North Carolina Literary Review has featured African American writers since the first issue, which included an essay on slave narratives by my late colleague Gay Wilentz and an interview with a writer of our own time, Linda Beatrice Brown, by Eric Weil. Over the years since the 1992 debut, we have published several essays on the works of Charles Waddell Chesnutt, and Randall Kenan has been featured in six issues. In addition to Kenan, we’ve published interviews with SammArt Williams, Anjail Rashida Ahmad, Zelda Lockhart, and Jaki Shelton Green, among other African American writers of this state. Race issues have certainly played a significant role in content by and about writers of various ethnicities.To borrow a phrase from Jaki Shelton Green in her remarks to the North Carolina Literary and Historical Association audience the night she accepted the R. Hunt Parker Award, our pages have “[borne] witness to our collective interlocked histories and herstories.” Even so, I agreed readily with Emily Herring Wilson’s suggestion to me during the 2017 North Carolina Writers Conference that it was time for a special feature section on African American literature in North Carolina. Although I did not have the words yet, I recognized what Jaki said during those same acceptance remarks (which we publish in the pages to come): “it is time” to give significant space to African American writers, to “mak[e] room for the ‘otherness.’” We include in this section, then, several reviews of new books by and stories about recent literary honors received by African American writers of North Carolina. Find here, too, one of the honorable mention essays selected by final judge Randall Kenan for our 2018 Alex Albright Creative Nonfiction Prize competition. Congratulations to Angela Betcher Epps

on her story and thank you to Randall Kenan, as well as congratulations on his induction into the North Carolina Literary Hall of Fame. Several of the finalists in the 2018 James Applewhite Poetry Prize competition are African American. Some of their poems appear in this issue, with more to come in the print issue’s special feature section. Enjoy here finalists Glenis Redmond, whose third-place poem will be in the print issue, as well as an interview with her; one of the competition’s honorable mention poems, by Crystal Simone Smith, new to our pages; and two poems by L. Teresa Church (another appearing in the print issue), who has been a finalist in past issues. Both Crystal and Teresa have poems in a haiku anthology reviewed in this section, too. Thank you to my friend, colleague, and writing partner Amber Flora Thomas, for serving as the final judge for the 2017 competition. Read a review of Amber’s new poetry collection in this section. Thanks go to another colleague, Gabrielle Brant Freeman, who has served NCLR in various capacities, including reviewing Jaki’s new poetry chapbook in this issue. We appreciate Stephanie Powell Watts for her service as the final judge of the 2018 Doris Betts Fiction Prize, and you will read her first- and second-place selections elsewhere in this issue. Here you will find a review of her novel, and in the 2019 print issue an interview with her and an essay on her novel. We received more submissions of literary criticism in response to this issue’s special feature topic than we have ever received for an issue. I urge you to subscribe today to make sure you do not miss essays on and interviews with African American writers of North Carolina from George Moses Horton and Harriet Ann Jacobs to Jason Mott (also reviewed here) and Stephanie Powell Watts. n