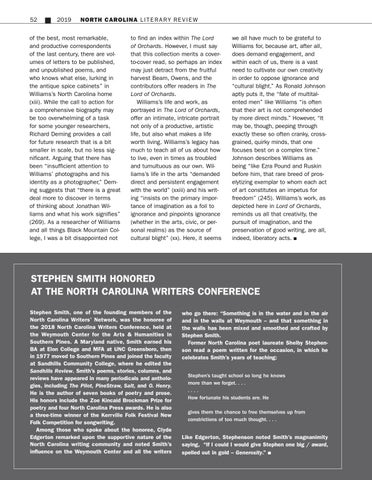 of the best, most remarkable, and productive correspondents of the last century, there are volumes of letters to be published, and unpublished poems, and who knows what else, lurking in the antique spice cabinets” in Williams’s North Carolina home (xiii). While the call to action for a comprehensive biography may be too overwhelming of a task for some younger researchers, Richard Deming provides a call for future research that is a bit smaller in scale, but no less significant. Arguing that there has been “insufficient attention to Williams’ photographs and his identity as a photographer,” Deming suggests that “there is a great deal more to discover in terms of thinking about Jonathan Williams and what his work signifies” (269). As a researcher of Williams and all things Black Mountain College, I was a bit disappointed not

to find an index within The Lord of Orchards. However, I must say that this collection merits a coverto-cover read, so perhaps an index may just detract from the fruitful harvest Beam, Owens, and the contributors offer readers in The Lord of Orchards. Williams’s life and work, as portrayed in The Lord of Orchards, offer an intimate, intricate portrait not only of a productive, artistic life, but also what makes a life worth living. Williams’s legacy has much to teach all of us about how to live, even in times as troubled and tumultuous as our own. Williams’s life in the arts “demanded direct and persistent engagement with the world” (xxiii) and his writing “insists on the primary importance of imagination as a foil to ignorance and pinpoints ignorance (whether in the arts, civic, or personal realms) as the source of cultural blight” (xx). Here, it seems

we all have much to be grateful to Williams for, because art, after all, does demand engagement, and within each of us, there is a vast need to cultivate our own creativity in order to oppose ignorance and “cultural blight.” As Ronald Johnson aptly puts it, the “fate of multitalented men” like Williams “is often that their art is not comprehended by more direct minds.” However, “It may be, though, peeping through exactly these so often cranky, crossgrained, quirky minds, that one focuses best on a complex time.” Johnson describes Williams as being “like Ezra Pound and Ruskin before him, that rare breed of proselytizing exemplar to whom each act of art constitutes an impetus for freedom” (245). Williams’s work, as depicted here in Lord of Orchards, reminds us all that creativity, the pursuit of imagination, and the preservation of good writing, are all, indeed, liberatory acts. n

STEPHEN SMITH HONORED AT THE NORTH CAROLINA WRITERS CONFERENCE Stephen Smith, one of the founding members of the North Carolina Writers’ Network, was the honoree of the 2018 North Carolina Writers Conference, held at the Weymouth Center for the Arts & Humanities in Southern Pines. A Maryland native, Smith earned his BA at Elon College and MFA at UNC Greensboro, then in 1977 moved to Southern Pines and joined the faculty at Sandhills Community College, where he edited the Sandhills Review. Smith’s poems, stories, columns, and reviews have appeared in many periodicals and anthologies, including The Pilot, PineStraw, Salt, and O. Henry. He is the author of seven books of poetry and prose. His honors include the Zoe Kincaid Brockman Prize for poetry and four North Carolina Press awards. He is also a three-time winner of the Kerrville Folk Festival New Folk Competition for songwriting. Among those who spoke about the honoree, Clyde Edgerton remarked upon the supportive nature of the North Carolina writing community and noted Smith’s influence on the Weymouth Center and all the writers

who go there: “Something is in the water and in the air and in the walls at Weymouth – and that something in the walls has been mixed and smoothed and crafted by Stephen Smith. Former North Carolina poet laureate Shelby Stephenson read a poem written for the occasion, in which he celebrates Smith’s years of teaching: Stephen’s taught school so long he knows more than we forget. . . . .... How fortunate his students are. He gives them the chance to free themselves up from constrictions of too much thought. . . .

Like Edgerton, Stephenson noted Smith’s magnanimity saying, “If I could I would give Stephen one big / award, spelled out in gold – Generosity.” n