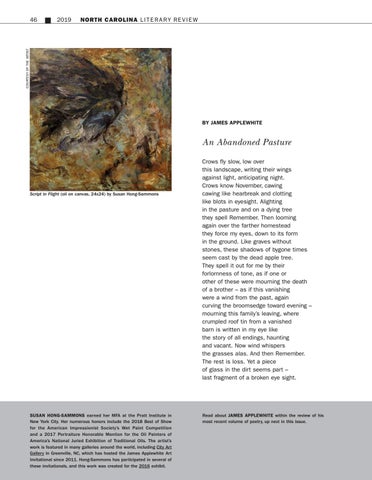 Script in Flight (oil on canvas, 24x24) by Susan Hong-Sammons

SUSAN HONG-SAMMONS earned her MFA at the Pratt Institute in New York City. Her numerous honors include the 2018 Best of Show for the American Impressionist Society’s Wet Paint Competition and a 2017 Portraiture Honorable Mention for the Oil Painters of America’s National Juried Exhibition of Traditional Oils. The artist’s work is featured in many galleries around the world, including City Art Gallery in Greenville, NC, which has hosted the James Applewhite Art Invitational since 2011. Hong-Sammons has participated in several of these invitationals, and this work was created for the 2016 exhibit.

Crows fly slow, low over this landscape, writing their wings against light, anticipating night. Crows know November, cawing cawing like hearbreak and clotting like blots in eyesight. Alighting in the pasture and on a dying tree they spell Remember. Then looming again over the farther homestead they force my eyes, down to its form in the ground. Like graves without stones, these shadows of bygone times seem cast by the dead apple tree. They spell it out for me by their forlornness of tone, as if one or other of these were mourning the death of a brother – as if this vanishing were a wind from the past, again curving the broomsedge toward evening – mourning this family’s leaving, where crumpled roof tin from a vanished barn is written in my eye like the story of all endings, haunting and vacant. Now wind whispers the grasses alas. And then Remember. The rest is loss. Yet a piece of glass in the dirt seems part – last fragment of a broken eye sight.

Read about JAMES APPLEWHITE within the review of his most recent volume of poetry, up next in this issue.