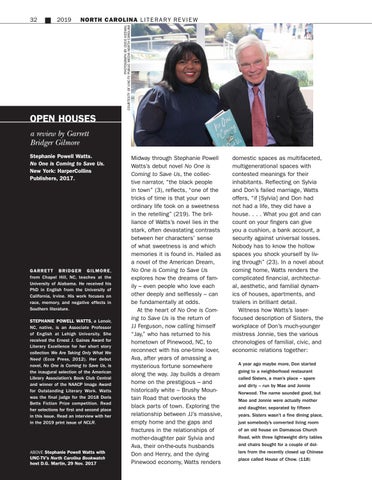 OPEN HOUSES a review by Garrett Bridger Gilmore Stephanie Powell Watts. No One is Coming to Save Us. New York: HarperCollins Publishers, 2017.

GARRETT BRIDGER GILMORE, from Chapel Hill, NC, teaches at the University of Alabama. He received his PhD in English from the University of California, Irvine. His work focuses on race, memory, and negative effects in Southern literature. STEPHANIE POWELL WATTS, a Lenoir, NC, native, is an Associate Professor of English at Lehigh University. She received the Ernest J. Gaines Award for Literary Excellence for her short story collection We Are Taking Only What We Need (Ecco Press, 2012). Her debut novel, No One is Coming to Save Us, is the inaugural selection of the American Library Association’s Book Club Central and winner of the NAACP Image Award for Outstanding Literary Work. Watts was the final judge for the 2018 Doris Betts Fiction Prize competition. Read her selections for first and second place in this issue. Read an interview with her in the 2019 print issue of NCLR.

ABOVE Stephanie Powell Watts with

Midway through Stephanie Powell Watts’s debut novel No One is Coming to Save Us, the collective narrator, “the black people in town” (3), reflects, “one of the tricks of time is that your own ordinary life took on a sweetness in the retelling” (219). The brilliance of Watts’s novel lies in the stark, often devastating contrasts between her characters’ sense of what sweetness is and which memories it is found in. Hailed as a novel of the American Dream, No One is Coming to Save Us explores how the dreams of family – even people who love each other deeply and selflessly – can be fundamentally at odds. At the heart of No One is Coming to Save Us is the return of JJ Ferguson, now calling himself “Jay,” who has returned to his hometown of Pinewood, NC, to reconnect with his one-time lover, Ava, after years of amassing a mysterious fortune somewhere along the way. Jay builds a dream home on the prestigious – and historically white – Brushy Mountain Road that overlooks the black parts of town. Exploring the relationship between JJ’s massive, empty home and the gaps and fractures in the relationships of mother-daughter pair Sylvia and Ava, their on-the-outs husbands Don and Henry, and the dying Pinewood economy, Watts renders

domestic spaces as multifaceted, multigenerational spaces with contested meanings for their inhabitants. Reflecting on Sylvia and Don’s failed marriage, Watts offers, “if [Sylvia] and Don had not had a life, they did have a house. . . . What you got and can count on your fingers can give you a cushion, a bank account, a security against universal losses. Nobody has to know the hollow spaces you shock yourself by living through” (23). In a novel about coming home, Watts renders the complicated financial, architectural, aesthetic, and familial dynamics of houses, apartments, and trailers in brilliant detail. Witness how Watts’s laserfocused description of Sisters, the workplace of Don’s much-younger mistress Jonnie, ties the various chronologies of familial, civic, and economic relations together: A year ago maybe more, Don started going to a neighborhood restaurant called Sisters, a man’s place – spare and dirty – run by Mae and Jonnie Norwood. The name sounded good, but Mae and Jonnie were actually mother and daughter, separated by fifteen years. Sisters wasn’t a fine dining place, just somebody’s converted living room of an old house on Damascus Church Road, with three lightweight dirty tables and chairs bought for a couple of dollars from the recently closed up Chinese place called House of Chow. (118)