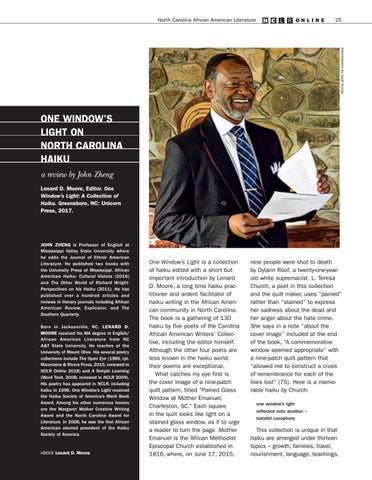 JOHN ZHENG is Professor of English at Mississippi Valley State University where he edits the Journal of Ethnic American Literature. He published two books with the University Press of Mississippi, African American Haiku: Cultural Visions (2016) and The Other World of Richard Wright: Perspectives on his Haiku (2011). He has published over a hundred articles and reviews in literary journals including African American Review, Explicator, and The Southern Quarterly. Born in Jacksonville, NC, LENARD D. MOORE received his MA degree in English/ African American Literature from NC A&amp;T State University. He teaches at the University of Mount Olive. His several poetry collections include The Open Eye (1985, rpt. Mountains &amp; Rivers Press, 2015, reviewed in NCLR Online 2018) and A Temple Looming (Word Tech, 2008; reviewed in NCLR 2009). HIs poetry has appeared in NCLR, including haiku in 1996. One Window’s Light received the Haiku Society of America’s Merit Book Award. Among his other numerous honors are the Margaret Walker Creative Writing Award and the North Carolina Award for Literature. In 2008, he was the first African American elected president of the Haiku Society of America.

One Window’s Light is a collection of haiku edited with a short but important introduction by Lenard D. Moore, a long time haiku practitioner and ardent facilitator of haiku writing in the African American community in North Carolina. The book is a gathering of 130 haiku by five poets of the Carolina African American Writers’ Collective, including the editor himself. Although the other four poets are less known in the haiku world, their poems are exceptional. What catches my eye first is the cover image of a nine-patch quilt pattern, titled “Pained Glass Window at Mother Emanuel, Charleston, SC.” Each square in the quilt looks like light on a stained glass window, as if to urge a reader to turn the page. Mother Emanuel is the African Methodist Episcopal Church established in 1816, where, on June 17, 2015,

nine people were shot to death by Dylann Roof, a twenty-one-yearold white supremacist. L. Teresa Church, a poet in this collection and the quilt maker, uses “pained” rather than “stained” to express her sadness about the dead and her anger about the hate crime. She says in a note “about the cover image” included at the end of the book, “A commemorative window seemed appropriate” with a nine-patch quilt pattern that “allowed me to construct a cross of remembrance for each of the lives lost” (75). Here is a memorable haiku by Church: one window’s light reflected onto another – katydid cacophony

This collection is unique in that haiku are arranged under thirteen topics – growth, families, travel, nourishment, language, teachings,