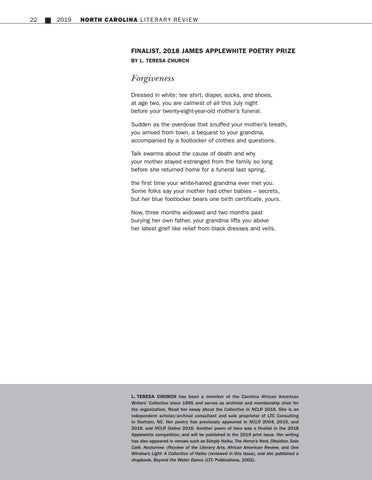 Forgiveness Dressed in white: tee shirt, diaper, socks, and shoes, at age two, you are calmest of all this July night before your twenty-eight-year-old mother’s funeral. Sudden as the overdose that snuffed your mother’s breath, you arrived from town, a bequest to your grandma, accompanied by a footlocker of clothes and questions. Talk swarms about the cause of death and why your mother stayed estranged from the family so long before she returned home for a funeral last spring, the first time your white-haired grandma ever met you. Some folks say your mother had other babies – secrets, but her blue footlocker bears one birth certificate, yours. Now, three months widowed and two months past burying her own father, your grandma lifts you above her latest grief like relief from black dresses and veils.

L. TERESA CHURCH has been a member of the Carolina African American Writers’ Collective since 1995 and serves as archivist and membership chair for the organization. Read her essay about the Collective in NCLR 2016. She is an independent scholar/archival consultant and sole proprietor of LTC Consulting in Durham, NC. Her poetry has previously appeared in NCLR 2004, 2016, and 2018, and NCLR Online 2016. Another poem of hers was a finalist in the 2018 Applewhite competition, and will be published in the 2019 print issue. Her writing has also appeared in venues such as Simply Haiku, The Heron’s Nest, Obsidian, Solo Café, Nocturnes: (Re)view of the Literary Arts, African American Review, and One Window’s Light: A Collection of Haiku (reviewed in this issue), and she published a chapbook, Beyond the Water Dance (LTC Publications, 2002).