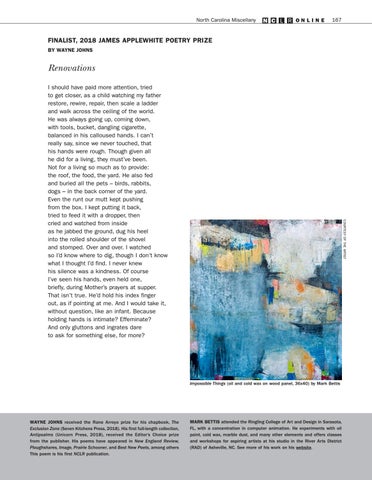 I should have paid more attention, tried to get closer, as a child watching my father restore, rewire, repair, then scale a ladder and walk across the ceiling of the world. He was always going up, coming down, with tools, bucket, dangling cigarette, balanced in his calloused hands. I can’t really say, since we never touched, that his hands were rough. Though given all he did for a living, they must’ve been. Not for a living so much as to provide: the roof, the food, the yard. He also fed and buried all the pets – birds, rabbits, dogs – in the back corner of the yard. Even the runt our mutt kept pushing from the box. I kept putting it back, tried to feed it with a dropper, then cried and watched from inside as he jabbed the ground, dug his heel into the rolled shoulder of the shovel and stomped. Over and over. I watched so I’d know where to dig, though I don’t know what I thought I’d find. I never knew his silence was a kindness. Of course I’ve seen his hands, even held one, briefly, during Mother’s prayers at supper. That isn’t true. He’d hold his index finger out, as if pointing at me. And I would take it, without question, like an infant. Because holding hands is intimate? Effeminate? And only gluttons and ingrates dare to ask for something else, for more?

WAYNE JOHNS received the Rane Arroyo prize for his chapbook, The Exclusion Zone (Seven Kitchens Press, 2018). His first full-length collection, Antipsalms (Unicorn Press, 2018), received the Editor’s Choice prize from the publisher. His poems have appeared in New England Review, Ploughshares, Image, Prairie Schooner, and Best New Poets, among others This poem is his first NCLR publication.

MARK BETTIS attended the Ringling College of Art and Design in Sarasota, FL, with a concentration in computer animation. He experiments with oil paint, cold wax, marble dust, and many other elements and offers classes and workshops for aspiring artists at his studio in the River Arts District (RAD) of Asheville, NC. See more of his work on his website.