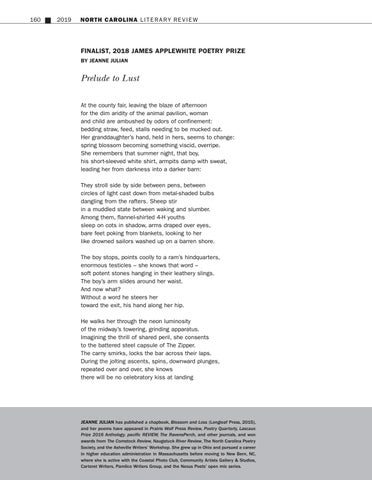 Prelude to Lust At the county fair, leaving the blaze of afternoon for the dim aridity of the animal pavilion, woman and child are ambushed by odors of confinement: bedding straw, feed, stalls needing to be mucked out. Her granddaughter’s hand, held in hers, seems to change: spring blossom becoming something viscid, overripe. She remembers that summer night, that boy, his short-sleeved white shirt, armpits damp with sweat, leading her from darkness into a darker barn: They stroll side by side between pens, between circles of light cast down from metal-shaded bulbs dangling from the rafters. Sheep stir in a muddled state between waking and slumber. Among them, flannel-shirted 4-H youths sleep on cots in shadow, arms draped over eyes, bare feet poking from blankets, looking to her like drowned sailors washed up on a barren shore. The boy stops, points coolly to a ram’s hindquarters, enormous testicles – she knows that word – soft potent stones hanging in their leathery slings. The boy’s arm slides around her waist. And now what? Without a word he steers her toward the exit, his hand along her hip. He walks her through the neon luminosity of the midway’s towering, grinding apparatus. Imagining the thrill of shared peril, she consents to the battered steel capsule of The Zipper. The carny smirks, locks the bar across their laps. During the jolting ascents, spins, downward plunges, repeated over and over, she knows there will be no celebratory kiss at landing

JEANNE JULIAN has published a chapbook, Blossom and Loss (Longleaf Press, 2015), and her poems have appeared in Prairie Wolf Press Review, Poetry Quarterly, Lascaux Prize 2016 Anthology, pacific REVIEW, The RavensPerch, and other journals, and won awards from The Comstock Review, Naugatuck River Review, The North Carolina Poetry Society, and the Asheville Writers’ Workshop. She grew up in Ohio and pursued a career in higher education administration in Massachusetts before moving to New Bern, NC, where she is active with the Coastal Photo Club, Community Artists Gallery & Studios, Carteret Writers, Pamlico Writers Group, and the Nexus Poets’ open mic series.