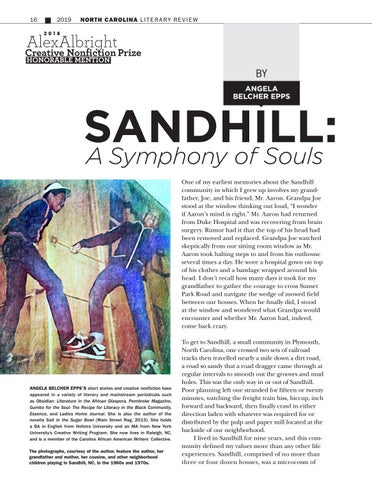 SANDHILL: A Symphony of Souls One of my earliest memories about the Sandhill community in which I grew up involves my grandfather, Joe, and his friend, Mr. Aaron. Grandpa Joe stood at the window thinking out loud, “I wonder if Aaron’s mind is right.” Mr. Aaron had returned from Duke Hospital and was recovering from brain surgery. Rumor had it that the top of his head had been removed and replaced. Grandpa Joe watched skeptically from our sitting room window as Mr. Aaron took halting steps to and from his outhouse several times a day. He wore a hospital gown on top of his clothes and a bandage wrapped around his head. I don’t recall how many days it took for my grandfather to gather the courage to cross Sunset Park Road and navigate the wedge of mowed field between our houses. When he finally did, I stood at the window and wondered what Grandpa would encounter and whether Mr. Aaron had, indeed, come back crazy.

ANGELA BELCHER EPPS’S short stories and creative nonfiction have appeared in a variety of literary and mainstream periodicals such as Obsidian: Literature in the African Diaspora, Pembroke Magazine, Gumbo for the Soul: The Recipe for Literacy in the Black Community, Essence, and Ladies Home Journal. She is also the author of the novella Salt in the Sugar Bowl (Main Street Rag, 2013). She holds a BA in English from Hofstra University and an MA from New York University’s Creative Writing Program. She now lives in Raleigh, NC, and is a member of the Carolina African American Writers’ Collective. The photographs, courtesy of the author, feature the author, her grandfather and mother, her cousins, and other neighborhood children playing in Sandhill, NC, in the 1960s and 1970s.

To get to Sandhill, a small community in Plymouth, North Carolina, one crossed two sets of railroad tracks then travelled nearly a mile down a dirt road, a road so sandy that a road dragger came through at regular intervals to smooth out the grooves and mud holes. This was the only way in or out of Sandhill. Poor planning left one stranded for fifteen or twenty minutes, watching the freight train hiss, hiccup, inch forward and backward, then finally crawl in either direction laden with whatever was required for or distributed by the pulp and paper mill located at the backside of our neighborhood. I lived in Sandhill for nine years, and this community defined my values more than any other life experiences. Sandhill, comprised of no more than three or four dozen houses, was a microcosm of