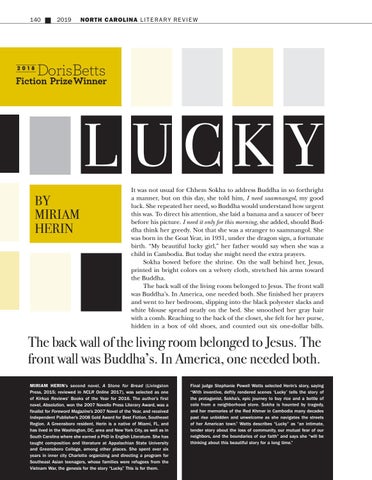 It was not usual for Chhem Sokha to address Buddha in so forthright a manner, but on this day, she told him, I need saamnangol, my good luck. She repeated her need, so Buddha would understand how urgent this was. To direct his attention, she laid a banana and a saucer of beer before his picture. I need it only for this morning, she added, should Buddha think her greedy. Not that she was a stranger to saamnangol. She was born in the Goat Year, in 1931, under the dragon sign, a fortunate birth. “My beautiful lucky girl,” her father would say when she was a child in Cambodia. But today she might need the extra prayers. Sokha bowed before the shrine. On the wall behind her, Jesus, printed in bright colors on a velvety cloth, stretched his arms toward the Buddha. The back wall of the living room belonged to Jesus. The front wall was Buddha’s. In America, one needed both. She finished her prayers and went to her bedroom, slipping into the black polyester slacks and white blouse spread neatly on the bed. She smoothed her gray hair with a comb. Reaching to the back of the closet, she felt for her purse, hidden in a box of old shoes, and counted out six one-dollar bills.

The back wall of the living room belonged to Jesus. The front wall was Buddha’s. In America, one needed both. MIRIAM HERIN’s second novel, A Stone for Bread (Livingston Press, 2015; reviewed in NCLR Online 2017), was selected as one of Kirkus Reviews’ Books of the Year for 2016. The author’s first novel, Absolution, won the 2007 Novello Press Literary Award, was a finalist for Foreword Magazine’s 2007 Novel of the Year, and received Independent Publisher’s 2008 Gold Award for Best Fiction, Southeast Region. A Greensboro resident, Herin is a native of Miami, FL, and has lived in the Washington, DC, area and New York City, as well as in South Carolina where she earned a PhD in English Literature. She has taught composition and literature at Appalachian State University and Greensboro College, among other places. She spent over six years in inner city Charlotte organizing and directing a program for Southeast Asian teenagers, whose families were refugees from the Vietnam War, the genesis for the story “Lucky.” This is for them.

Final judge Stephanie Powell Watts selected Herin’s story, saying “With inventive, deftly rendered scenes ‘Lucky’ tells the story of the protagonist, Sokha’s, epic journey to buy rice and a bottle of cola from a neighborhood store. Sokha is haunted by tragedy, and her memories of the Red Khmer in Cambodia many decades past rise unbidden and unwelcome as she navigates the streets of her American town.” Watts describes “Lucky” as “an intimate, tender story about the loss of community, our mutual fear of our neighbors, and the boundaries of our faith” and says she “will be thinking about this beautiful story for a long time.”