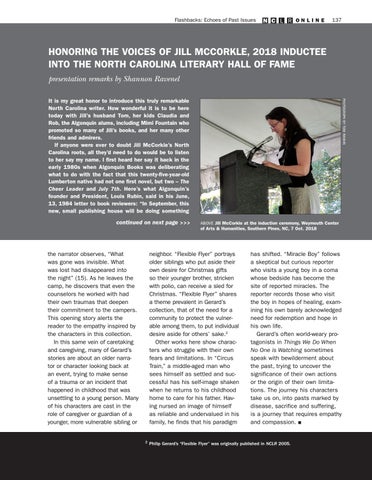 HONORING THE VOICES OF JILL MCCORKLE, 2018 INDUCTEE INTO THE NORTH CAROLINA LITERARY HALL OF FAME presentation remarks by Shannon Ravenel

continued on next page >>>

It is my great honor to introduce this truly remarkable North Carolina writer. How wonderful it is to be here today with Jill’s husband Tom, her kids Claudia and Rob, the Algonquin alums, including Mimi Fountain who promoted so many of Jill’s books, and her many other friends and admirers. If anyone were ever to doubt Jill McCorkle’s North Carolina roots, all they’d need to do would be to listen to her say my name. I first heard her say it back in the early 1980s when Algonquin Books was deliberating what to do with the fact that this twenty-five-year-old Lumberton native had not one first novel, but two – The Cheer Leader and July 7th. Here’s what Algonquin’s founder and President, Louis Rubin, said in his June, 13, 1984 letter to book reviewers: “In September, this new, small publishing house will be doing something ABOVE Jill McCorkle at the induction ceremony, Weymouth Center

neighbor. “Flexible Flyer” portrays older siblings who put aside their own desire for Christmas gifts so their younger brother, stricken with polio, can receive a sled for Christmas. “Flexible Flyer” shares a theme prevalent in Gerard’s collection, that of the need for a community to protect the vulnerable among them, to put individual desire aside for others’ sake.2 Other works here show characters who struggle with their own fears and limitations. In “Circus Train,” a middle-aged man who sees himself as settled and successful has his self-image shaken when he returns to his childhood home to care for his father. Having nursed an image of himself as reliable and undervalued in his family, he finds that his paradigm

the narrator observes, “What was gone was invisible. What was lost had disappeared into the night” (15). As he leaves the camp, he discovers that even the counselors he worked with had their own traumas that deepen their commitment to the campers. This opening story alerts the reader to the empathy inspired by the characters in this collection. In this same vein of caretaking and caregiving, many of Gerard’s stories are about an older narrator or character looking back at an event, trying to make sense of a trauma or an incident that happened in childhood that was unsettling to a young person. Many of his characters are cast in the role of caregiver or guardian of a younger, more vulnerable sibling or 2

has shifted. “Miracle Boy” follows a skeptical but curious reporter who visits a young boy in a coma whose bedside has become the site of reported miracles. The reporter records those who visit the boy in hopes of healing, examining his own barely acknowledged need for redemption and hope in his own life. Gerard’s often world-weary protagonists in Things We Do When No One is Watching sometimes speak with bewilderment about the past, trying to uncover the significance of their own actions or the origin of their own limitations. The journey his characters take us on, into pasts marked by disease, sacrifice and suffering, is a journey that requires empathy and compassion. n