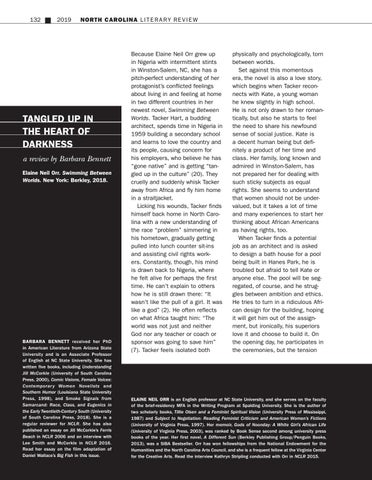 TANGLED UP IN THE HEART OF DARKNESS a review by Barbara Bennett Elaine Neil Orr. Swimming Between Worlds. New York: Berkley, 2018.

BARBARA BENNETT received her PhD in American Literature from Arizona State University and is an Associate Professor of English at NC State University. She has written five books, including Understanding Jill McCorkle (University of South Carolina Press, 2000), Comic Visions, Female Voices: Contemporar y Women Novelists and Southern Humor (Louisiana State University Press, 1998), and Smoke Signals from Samarcand: Race, Class, and Eugenics in the Early Twentieth-Century South (University of South Carolina Press, 2018). She is a regular reviewer for NCLR. She has also published an essay on Jill McCorkle’s Ferris Beach in NCLR 2006 and an interview with Lee Smith and McCorkle in NCLR 2016. Read her essay on the film adaptation of Daniel Wallace’s Big Fish in this issue.

Because Elaine Neil Orr grew up in Nigeria with intermittent stints in Winston-Salem, NC, she has a pitch-perfect understanding of her protagonist’s conflicted feelings about living in and feeling at home in two different countries in her newest novel, Swimming Between Worlds. Tacker Hart, a budding architect, spends time in Nigeria in 1959 building a secondary school and learns to love the country and its people, causing concern for his employers, who believe he has “gone native” and is getting “tangled up in the culture” (20). They cruelly and suddenly whisk Tacker away from Africa and fly him home in a straitjacket. Licking his wounds, Tacker finds himself back home in North Carolina with a new understanding of the race “problem” simmering in his hometown, gradually getting pulled into lunch counter sit-ins and assisting civil rights workers. Constantly, though, his mind is drawn back to Nigeria, where he felt alive for perhaps the first time. He can’t explain to others how he is still drawn there: “It wasn’t like the pull of a girl. It was like a god” (2). He often reflects on what Africa taught him: “The world was not just and neither God nor any teacher or coach or sponsor was going to save him” (7). Tacker feels isolated both

physically and psychologically, torn between worlds. Set against this momentous era, the novel is also a love story, which begins when Tacker reconnects with Kate, a young woman he knew slightly in high school. He is not only drawn to her romantically, but also he starts to feel the need to share his newfound sense of social justice. Kate is a decent human being but definitely a product of her time and class. Her family, long known and admired in Winston-Salem, has not prepared her for dealing with such sticky subjects as equal rights. She seems to understand that women should not be undervalued, but it takes a lot of time and many experiences to start her thinking about African Americans as having rights, too. When Tacker finds a potential job as an architect and is asked to design a bath house for a pool being built in Hanes Park, he is troubled but afraid to tell Kate or anyone else. The pool will be segregated, of course, and he struggles between ambition and ethics. He tries to turn in a ridiculous African design for the building, hoping it will get him out of the assignment, but ironically, his superiors love it and choose to build it. On the opening day, he participates in the ceremonies, but the tension

ELAINE NEIL ORR is an English professor at NC State University, and she serves on the faculty of the brief-residency MFA in the Writing Program at Spalding University. She is the author of two scholarly books, Tillie Olsen and a Feminist Spiritual Vision (University Press of Mississippi, 1987) and Subject to Negotiation: Reading Feminist Criticism and American Women’s Fictions (University of Virginia Press, 1997). Her memoir, Gods of Noonday: A White Girl’s African Life (University of Virginia Press, 2003), was ranked by Book Sense second among university press books of the year. Her first novel, A Different Sun (Berkley Publishing Group/Penguin Books, 2013), was a SIBA Bestseller. Orr has won fellowships from the National Endowment for the Humanities and the North Carolina Arts Council, and she is a frequent fellow at the Virginia Center for the Creative Arts. Read the interview Kathryn Stripling conducted with Orr in NCLR 2015.