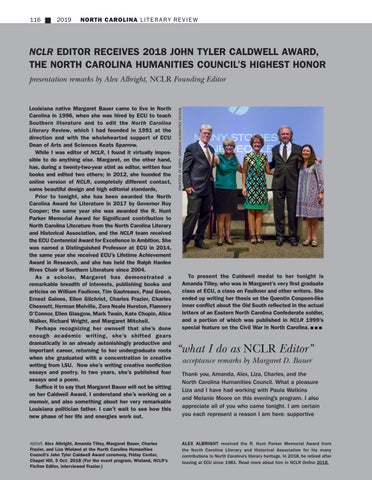 Louisiana native Margaret Bauer came to live in North Carolina in 1996, when she was hired by ECU to teach Southern literature and to edit the North Carolina Literary Review, which I had founded in 1991 at the direction and with the wholehearted support of ECU Dean of Arts and Sciences Keats Sparrow. While I was editor of NCLR, I found it virtually impossible to do anything else. Margaret, on the other hand, has, during a twenty-two-year stint as editor, written four books and edited two others; in 2012, she founded the online version of NCLR, completely different contact, same beautiful design and high editorial standards, Prior to tonight, she has been awarded the North Carolina Award for Literature in 2017 by Governor Roy Cooper; the same year she was awarded the R. Hunt Parker Memorial Award for Significant contribution to North Carolina Literature from the North Carolina Literary and Historical Association, and the NCLR team received the ECU Centennial Award for Excellence in Ambition. She was named a Distinguished Professor at ECU in 2014, the same year she received ECU’s Lifetime Achievement Award in Research, and she has held the Ralph Hardee Rives Chair of Southern Literature since 2004. As a scholar, Margaret has demonstrated a remarkable breadth of interests, publishing books and articles on William Faulkner, Tim Gautreaux, Paul Green, Ernest Gaines, Ellen Gilchrist, Charles Frazier, Charles Chesnutt, Herman Melville, Zora Neale Hurston, Flannery O’Connor, Ellen Glasgow, Mark Twain, Kate Chopin, Alice Walker, Richard Wright, and Margaret Mitchell. Perhaps recognizing her ownself that she’s done enough academic writing, she’s shifted gears dramatically in an already astonishingly productive and important career, returning to her undergraduate roots when she graduated with a concentration in creative writing from LSU. Now she’s writing creative nonfiction essays and poetry. In two years, she’s published four essays and a poem. Suffice it to say that Margaret Bauer will not be sitting on her Caldwell Award. I understand she’s working on a memoir, and also something about her very remarkable Louisiana politician father. I can’t wait to see how this new phase of her life and energies work out.

To present the Caldwell medal to her tonight is Amanda Tilley, who was in Margaret’s very first graduate class at ECU, a class on Faulkner and other writers. She ended up writing her thesis on the Quentin Conpson-like inner conflict about the Old South reflected in the actual letters of an Eastern North Carolina Confederate soldier, and a portion of which was published in NCLR 1999’s special feature on the Civil War in North Carolina. n n n

“what I do as NCLR Editor” acceptance remarks by Margaret D. Bauer Thank you, Amanda, Alex, Liza, Charles, and the North Carolina Humanities Council. What a pleasure Liza and I have had working with Paula Watkins and Melanie Moore on this evening’s program. I also appreciate all of you who came tonight. I am certain you each represent a reason I am here: supportive

ALEX ALBRIGHT received the R. Hunt Parker Memorial Award from the North Carolina LIterary and Historical Association for his many contributions to North Carolina’s literary heritage. In 2018, he retired after teacing at ECU since 1981. Read more about him in NCLR Online 2018.