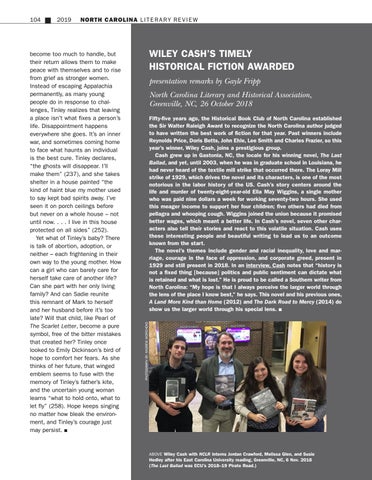 become too much to handle, but their return allows them to make peace with themselves and to rise from grief as stronger women. Instead of escaping Appalachia permanently, as many young people do in response to challenges, Tinley realizes that leaving a place isn’t what fixes a person’s life. Disappointment happens everywhere she goes. It’s an inner war, and sometimes coming home to face what haunts an individual is the best cure. Tinley declares, “the ghosts will disappear. I’ll make them” (237), and she takes shelter in a house painted “the kind of haint blue my mother used to say kept bad spirits away. I’ve seen it on porch ceilings before but never on a whole house – not until now. . . . I live in this house protected on all sides” (252). Yet what of Tinley’s baby? There is talk of abortion, adoption, or neither – each frightening in their own way to the young mother. How can a girl who can barely care for herself take care of another life? Can she part with her only living family? And can Sadie reunite this remnant of Mark to herself and her husband before it’s too late? Will that child, like Pearl of The Scarlet Letter, become a pure symbol, free of the bitter mistakes that created her? Tinley once looked to Emily Dickinson’s bird of hope to comfort her fears. As she thinks of her future, that winged emblem seems to fuse with the memory of Tinley’s father’s kite, and the uncertain young woman learns “what to hold onto, what to let fly” (258). Hope keeps singing no matter how bleak the environment, and Tinley’s courage just may persist. n

WILEY CASH’S TIMELY HISTORICAL FICTION AWARDED presentation remarks by Gayle Fripp North Carolina Literary and Historical Association, Greenville, NC, 26 October 2018 Fifty-five years ago, the Historical Book Club of North Carolina established the Sir Walter Raleigh Award to recognize the North Carolina author judged to have written the best work of fiction for that year. Past winners include Reynolds Price, Doris Betts, John Ehle, Lee Smith and Charles Frazier, so this year’s winner, Wiley Cash, joins a prestigious group. Cash grew up in Gastonia, NC, the locale for his winning novel, The Last Ballad, and yet, until 2003, when he was in graduate school in Louisiana, he had never heard of the textile mill strike that occurred there. The Loray Mill strike of 1929, which drives the novel and its characters, is one of the most notorious in the labor history of the US. Cash’s story centers around the life and murder of twenty-eight-year-old Ella May Wiggins, a single mother who was paid nine dollars a week for working seventy-two hours. She used this meager income to support her four children; five others had died from pellagra and whooping cough. Wiggins joined the union because it promised better wages, which meant a better life. In Cash’s novel, seven other characters also tell their stories and react to this volatile situation. Cash uses these interesting people and beautiful writing to lead us to an outcome known from the start. The novel’s themes include gender and racial inequality, love and marriage, courage in the face of oppression, and corporate greed, present in 1929 and still present in 2018. In an interview, Cash notes that “history is not a fixed thing [because] politics and public sentiment can dictate what is retained and what is lost.” He is proud to be called a Southern writer from North Carolina: “My hope is that I always perceive the larger world through the lens of the place I know best,” he says. This novel and his previous ones, A Land More Kind than Home (2012) and The Dark Road to Mercy (2014) do show us the larger world through his special lens. n PHOTOGRAPH BY ANDREW MOREHEAD